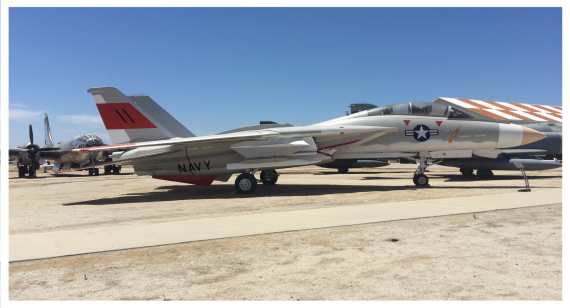 The Grumman F-14 Tomcat is an American supersonic, twin-engine, two-seat, twin-tail, variable-sweep wing fighter aircraft. The Tomcat was developed for the United States Navy after the collapse of the F-111B project. The first F-14 flew on December 21, 1970 and made its initial deployment in 1974 with the U.S. Navy aboard USS Enterprise (CVN-65), replacing the McDonnell Douglas F-4 Phantom II.  The F-14 served as the U.S. Navy's primary maritime air superiority fighter, fleet defense interceptor, and tactical aerial reconnaissance platform for more than 30 years.

Constructed from over 24% titanium, the variable-sweep wings are computer controlled and automatically adjust to the most effective position. At full forward sweep this large and heavy aircraft can take off in less than 1000 feet. The F-14 fire control system can track up to 24 targets 100 miles away and attack up to six targets (at 80 miles) simultaneously with the long-range Phoenix missiles.

The F-14’s first combat engagement occurred in the Mediterranean where it tangled with (and shot down) two Libyan fighters in August of 1981 when two Libyan SU-22 fighters fired at two F-14s on patrol. The Tomcats executed an offensive split and returned fire destroying both opponents.

By 1987 the F-14D “Super Tomcat” was produced with the GE F-110 turbofan engines with 27,000 pounds of thrust and improved avionics. Production of the upgraded Tomcats began in 1990 with plans to produce 127 new aircraft and to remanufacture the remaining 400 F-14As to “D” standards. The Navy retired the last F-14 in 2009 after their replacement, the F-18 Super Hornet, assumed its role.

March Field Air Museum’s F-14 is a preproduction A model, serial number BUNO 157990.  It was number 11 of 12 test aircraft built.  One of the many important tasks that it participated in was on the USS Independence, testing its suitability for carrier use.   The aircraft was transferred to General Dynamics - Pomona, along with the ground support equipment where it was used to mount missiles for test evaluations before being lent to the museum. 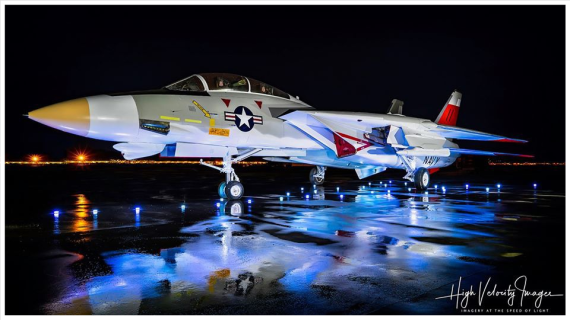