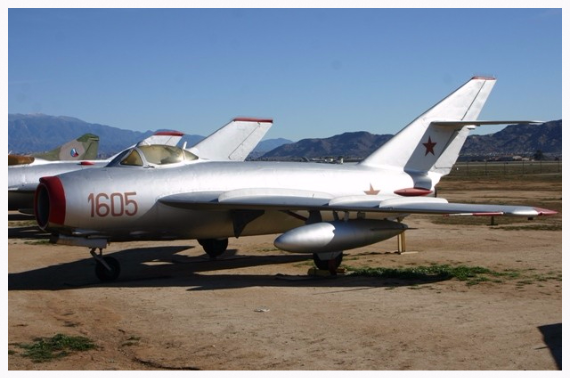 The Mikoyan-Gurevich MiG-17 is a swept-wing jet fighter first flown in 1950 and produced in the USSR from 1952. Operated by numerous air forces in many variants, licensed production was carried out in East Germany, Poland (PZL-Mielec Lim-6) and the People’s Republic of China (Shenyang J-5). NATO reporting name "Fresco".

The MiG-17 design was generally based on a previously successful Mikoyan and Gurevich fighter, the MiG-15. Both shared the same Klimov VK-1 engine and major design similarities. The major novelty was its introduction of a swept wing with a "compound sweep" configuration: a 45° angle near the fuselage, and a 42° angle for the outboard part of the wings. Other easily visible differences to its predecessor were the three wing-fences on each wing, instead of the MiG-15's two, and the addition of a ventral fin.

The MiG 17 proved a formidable opponent in Vietnam.  Its small size made it difficult to see and its powerful cannon armament could shred U.S. aircraft at close range.

The MiG - 17 at the museum was donated by Nancy and Walter Jarrett.