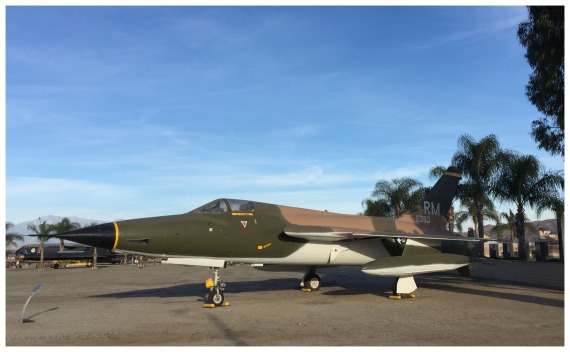 This single seat fighter-bomber built by Republic a specially designed swept-forward air intake ducts, advanced electronic equipment to provide all-weather, near automatic capabilities. The pilot could perform a round trip, low- or high-level bombing missions in any weather, day or night, over any terrain without ever seeing the ground utilizing a LORAN system. A completely integrated bombing-navigation-search system utilized nuclear or thermonuclear weapons and guided missiles. Conventional bombing capability with 12 750-pound bombs was made possible by modifications during the Vietnam conflict.

Planes also were equipped with armor plate, backup flight control systems, new radar altimeters, new gunsights and improved ejection seats, inflight refueling and an automatic 20mm cannon with a rate of fire of 6,000 rounds per minute. The J-75 engine produced 25,500 pounds of thrust with water injection and an afterburner.

The March Field Museum has two F-105's. The "D" model, serial number 62-4383, served with the Pacific Air Force, Tactical Air Command and the Air Force Reserve before being retired in January 1984. The total flight hours on this aircraft is 5,049. This aircraft is on loan from the NMUSAF