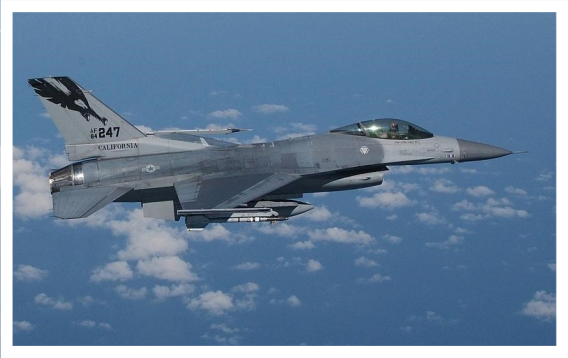 The General Dynamics (later Lockheed-Martin) F-16 Fighting Falcon was the winner of the Air Force’s Lightweight Fighter Competition in the early 1970’s.  The aircraft entered service in 1980.  Pilots nicknamed it the Electric Jet due to its fly-by-wire controls.  It is more commonly referred to as the Viper.  The F-16 features a reclined ejection seat that helps pilots tolerate high G-forces (the airframe is stressed to nine G’s) and a side-stick controller in place of a traditional joystick.  It is equipped with a 20mm rotary cannon and can carry a vast array of air-to-air and air-to-ground weapons.

The Viper has proven popular not just with the USAF—where it has been the most numerous fighter in the inventory—but with dozens of air forces around the world.  While it has limited beyond visual range capability, it excels as a close-in dogfighter, a fighter-bomber and in the Wild Weasel role.  It has seen combat in Bosnia, Iraq, Afghanistan and the Middle East.  Vipers escorted Air Force One on 9/11.  Israeli F-16’s destroyed an Iraqi nuclear reactor in 1981.

The F-16 is scheduled to be replaced by the Lockheed-Martin F-35 Lightning ll in front-line units but the Viper figures to soldier on in the ANG and Reserves and in foreign air forces for decades to come.

The museum does not have an F-16 but the Viper is a common sight at MARB.  Typically, four ANG aircraft are assigned on TDY.  Two of these planes and their pilots are on alert 24/7. and can be airborne in eight minutes or less.  They are the air defense for the American Southwest.