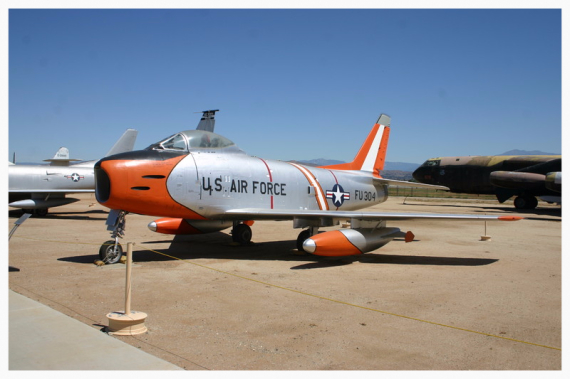 The United States Air Force’s first swept wing fighter, the North American F-86 Sabre, became an aviation legend in the hands of skilled US pilots in the hotly contested skies of “MiG Alley” during the Korean War.

Designed late in the World War 2 the first prototype F-86s did not fly until 1947 allowing the US design team to take advantage of captured German technical data relating to the advantages of swept wing designs in high-speed jet fighters. Powered with a General Electric J47 turbojet and armed with six .50 caliber machine guns the F-86 Sabre entered USAF service in 1949.

When war broke out on the Korean peninsula, F-86 Sabres were rushed to the Far East after older-model US fighters proved no match for the nimble MiG-15s of the communist forces. By the end of the conflict, USAF Sabres were credited with the destruction of 792 MiG-15s for the loss of 78 F-86s, an astonishing ten to one success rate. Later, after the fall of the Soviet Union when records became available, the rate was revised to a still respectable 1.8 to 1 by 2008 Rand Corporation study "Air Combat Past, Present and Future."

The museum’s F-86H serial number 53-1304 (on loan from the USAF) was manufactured by North American Aviation, Columbus Ohio and delivered to the Air Force on April 8, 1955. Armed with the four powerful 20mm cannons the “H” model 53-1304 wears the bright orange livery of its first assignment in April of 1955, the 413th Fighter Day Group, Tactical Air Command, George Air Force Base California. This aircraft is on loan from the NMUSAF