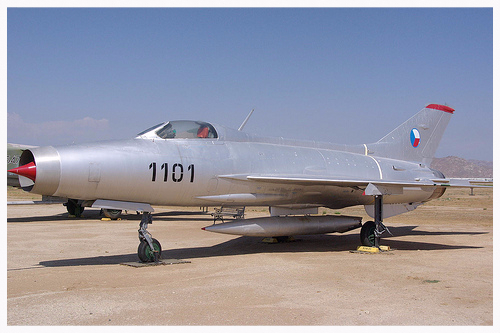 The Mig-21 came from the successful design bureau of Artem Mikoyan and Mikhail Gurevich. The MiG-21 Fishbed F is a short-range, supersonic, day fighter-interceptor and the first major production version of the popular MiG-21 series. It is but one of many versions of this aircraft that have served in the air arms of many nations around the world. The E-5 prototype of the MiG-21 was first flown in 1955 and made its first public appearance during the Soviet Aviation Day display at Moscow's Tushino Airport in June 1956.

More than 30 countries of the world--including nations friendly to the U.S.--have flown the MiG-21. At least 15 versions of the MiG-21 have been produced, some outside the Soviet Union. Estimates place the number built at more than 8,000, a production total exceeding that of any other modern jet

The MiG-21F-13 on display was built in Czechoslovakia and flew in the air force of that nation.  It was donated in 2002 by Lillie Hornak, of Palm Springs, CA. There were 194 MiG-21F-13's built in that country. Their version did not have a cockpit window behind the pilot's head.