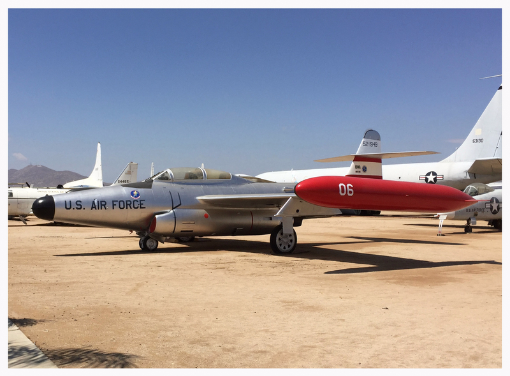 Designed by Northrop, the twin-engine dual cockpit F-89 Scorpion was an all-weather fighter-interceptor specifically for the Air Defense Command. With the radar operator in the rear seat guiding the pilot, the F-89 could locate, intercept and destroy enemy aircraft by day or night under all types of weather conditions. The first F-89 made its initial flight in August 1948 and deliveries to the Air Force began in July 1950.

The conventionally designed aircraft had a few unique elements giving it a distinctive character. The position of the horizontal stabilizer high on the tail to avoid turbulence from the engine exhaust, gave the F-89 the appearance of a scorpion with its tail raised to strike. Its low-slung engine intakes earned the F-89 a reputation as the “world's largest vacuum cleaner" by picking up litter from the runway. Inlet screens were not the answer, since at extremely high altitudes, the screens became completely clogged with ice. Later, retractable inlet screens were installed.

With a nose full of electronic sensing equipment and wing-tip pods that carried up to 104 aerial rockets or six Falcon air-to-air missiles with range of 4.5 nautical miles, the Scorpion became the first nuclear-armed interceptor carrying two AIR-2 Genie nuclear air-to-air missiles. It was the heaviest armed fighter in the Air Defense Command with the mission to intercept and attack, enemy bombers approaching the United States. On July 19, 1957, an F-89J (a modified F-89D) fired a Genie test rocket with a nuclear warhead, and it detonated over a Nevada test range. It marked the first launch of an air-to-air rocket with a nuclear warhead. Northrop converted 350 F-89Ds to J models, Air Defense Command's first fighter-interceptor to carry nuclear armament.

The F-89J flew until the early 1960s when sufficient numbers of Genie-equipped F-101 and F-106 fighters became available. Before their retirement, the F-89 had equipped 39 active Air Force units and 17 ANG squadrons. Phaseout began in 1959 from the Air Force and by 1962 there were 9 ANG squadrons still equipped with F-89s and by 1969 all had been retired from the service.