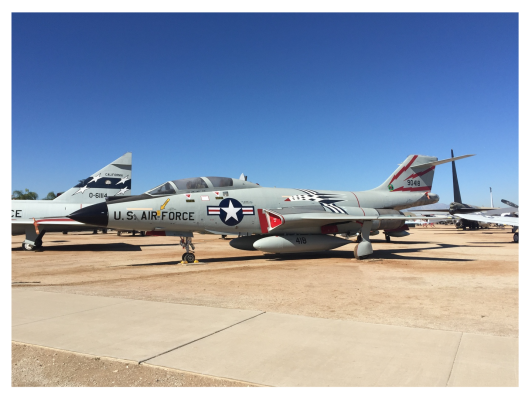 The F-101 "Voodoo" was initially intended as an all-weather, supersonic fighter escort for Strategic Air Command B-29, B-50 and B-36 heavy bombers penetrating deep into Soviet air space. As requirements changed the aircraft was modified to become an interceptor then, with the advent of twin cockpits and the MG-13 Fire Control System, the B model, a nuclear armed interceptor carrying two Air 2A Genie nuclear air-to-air missiles designed to kill Soviet bomber formations.

The "B" model was an all-weather interceptor, carried no internal cannon, instead a rotary missile bay for three Falcon missiles or 2 Air 2A Genies was substituted. Long a staple of Air Defense Units in the United States and Canada in Canadian service the Voodoo flew until 1985 before being replaced by the F-18 Hornet.

Our March Museum Voodoo, the interceptor version, serial number 59-418, was delivered in 1960 to the 49th Fighter Interceptor Squadron, Air Defense Command, Griffiss AFB, New York. In 1968 it went to the 60th FIS, Otis AFB, Massachsetts and in 1971 to the 107th TFG (ANG), Niagara Falls, New York. Retired in 1982, it came to the museum. This aircraft is on loan from the NMUSAF