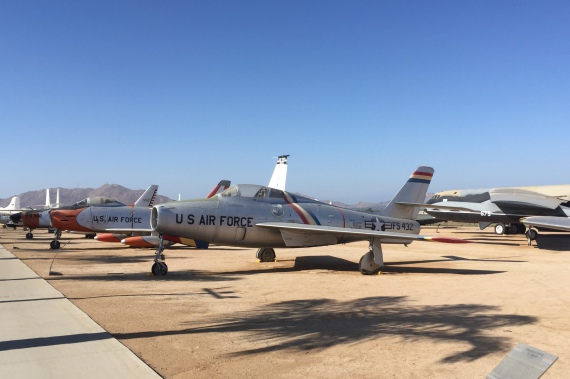 surfaced. The first production runs were equipped with conventional stabilizer-elevator tail-planes, which caused an accelerated stall pitch-up problem and degraded maneuverability at combat speeds. By May of 1954, the introduction of a hydraulically powered one-piece stabilizer and side-mounted spoilers improved performance and corrected the high-speed control problems.

Notable as one of the first aircraft to be utilized by the USAF Thunderbirds Flight Demonstration Team the F-84F only saw limited usage (mostly by NATO Allies) in its intended combat role. Throughout its service life, maintenance difficulties from control-rod corrosion to a disturbing tendency for the J65 engine to flameout when flying through heavy snow or rainstorms continued to plague the aircraft. Replaced by the F-4 Phantom in 1964, the remaining F-84F's were re-assigned to Air National Guard units until their complete withdrawal from service in 1971.

Operationally, the F-84F made its most significant contribution to history when two West German Air Force F-84F's wandered into communist controlled East German airspace in September 1961, one month after the construction of the Berlin Wall. A quick-thinking USAF Radar Controller at Berlin's Tempelhof Airport ordered the F-84F's to divert directly to West Berlin allowing the Thunderstreaks to evade pursuing Soviet MiG Fighters thereby avoiding an armed confrontation.

The museum's F-84F, s/n 51-9432 was manufactured by General Motors, Kansas City, Kansas and delivered to the USAF on October 25, 1954. Restored by museum volunteers, our F-84F wears the livery of a Wing Commander from its first active duty assignment with the 12th Strategic Fighter Wing, Strategic Air Command, Bergstrom Air Force Base, Texas. This aircraft is on loan from the NMUSAF