As Republic Aviation's F-84 "Thunderjet" series of aircraft was reaching the twilight of its operational career, the engineers at Republic were hard at work on a new aircraft design. This aircraft was to be a single engine fighter-bomber capable of delivering nuclear weapons from its bomb bay or five external weapons pylons.

The YF-105A first flew on the 22nd of October 1955. The YF-105B followed on the 26th of May 1956. The "B" model became operational two years later in May of 1958. Only 88 "B" model "Thunderchiefs" were built before introduction of the "D" model (another source indicates that only 75 B models were produced). The "C" model, a two seat instructional aircraft, was never introduced into production. The F-105B flew as a fighter-bomber until final type phase out in 1981.

The F-105 Thunderchief was the heaviest US single seat, single engine fighter until the arrival of the Lockheed F-35 Lightning II. The extreme weight earned it the unofficial nickname "Thud" or "The Lead Sled". It was a very durable and rugged aircraft. A full load take-off roll was over 8000 feet. Pilots in Vietnam claimed that rocks could be put in the jet air intakes and sand would come out the other end. The F-105 could carry all of the weapons of the US inventory (including nuclear) during the Vietnam War era and its bomb load was greater than that of a World War II B-17. It is no surprise, then, that this aircraft type carried out more attack missions in Vietnam than any other type of aircraft. Of the 137 enemy planes shot down during the war, 29 were shot down by F-105's. The high usage took its toll, however. Out of 833 F-105 series aircraft built by Fairchild Republic, over 400 were lost in Vietnam air-to-air combat and bombing missions.

The March Field Air Museum’s B model F-105 is serial number 57-5803. This aircraft is on loan from the NMUSAF. 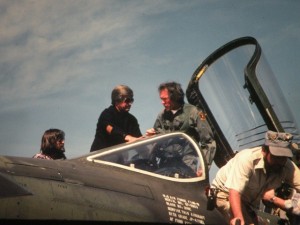 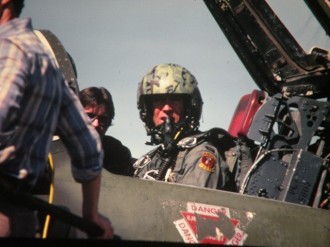