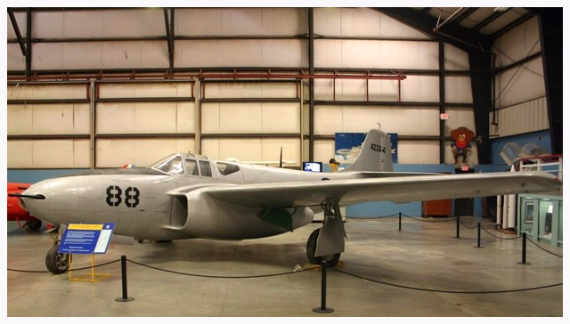 The result of a top-secret project begun before the start of the Second World War, the single-seat Bell P-59A was the United States first jet fighter. Designed around a modified British 'Whittle' engine, the P-59 series aircraft were constructed by Bell Aircraft at its Wheatfield, New York factory. In order to disguise its advanced power plant, the first XP-59 test aircraft was fitted with a removable false propeller whenever it was on the ground. Despite the innovative design, the P-59 series was plagued with continuing performance problems, centering on the aircrafts’ finicky General Electric Model 1A turbo-jet engine. These difficulties prevented any P-59s from seeing combat in World War 2.

Perhaps, the aircrafts’ greatest contribution to the advancement of aviation came as a by-product of its developmental testing at Muroc Army Air Field, California, now Edwards Air Force Base. There, aviation engineers used the extensive flight data collected in the P-59 program to design the next generation of American jet fighters including the successful P-80 Shooting Star.

Fifty-seven aircraft of the P-59 series were built, seven XP pre-production, twenty A production and thirty B production models. Later, at least one of the XP models was converted to an A. Of the original fifty-seven, only six are known to exist today.

March Field Air Museum's P-59A Airacomet 44-22614 was accepted from Bell Aircraft on September 25, 1944 and was assigned to the 412th Fighter Group, located at Muroc Army Air Field. In November of 1945, the aircraft was transferred to March Field where five months later it was removed from service. First used as an instructional airframe at a technical school in Santa Maria, California, 44-22614 later went into storage at Edwards AFB.

In 1980, P-59A Airacomet 44-22614 returned to March Field, this time as a collection of parts on the back of a truck. Dedicated March Field Air Museum volunteers and members of the 452nd Air Refueling Wing began the process of painstakingly piecing the aircraft together. By the early 1990s, the Air Force withdrew, leaving only museum volunteers to complete the task. In 1997, seventeen years after returning to March, P-59A 44-22614, the only remaining production P-59A in existence, was completed. P-59A Airacomet 44-22614, is on loan from the NMUSAF.