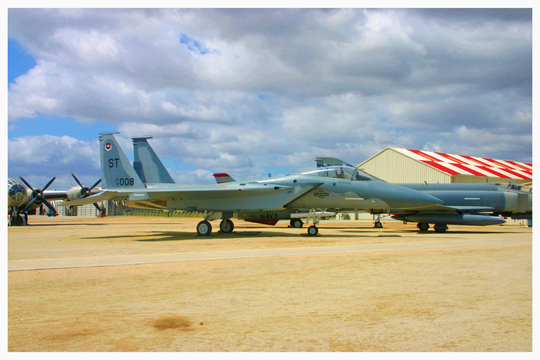 The United States Air Force F-15 Eagle is a twin-engine, high-performance, all-weather fighter designed to seize and hold air superiority by sweeping the skies of all opposing forces. Entering the United State Air Force inventory on November 14, 1974 the F-15 was the pinnacle of aviation technology for the last quarter of the 20th century.

Capable of flight at greater than Mach 2.5 the Eagle was the first U.S. fighter to have less than a one to one thrust to weight ratio. The extraordinary power provided by the two Pratt & Whitney F100 axial-flow turbofan engines, equipped with afterburners, gave the sleek fighter the phenomenal ability to maintain acceleration while in a vertical climb. The F-15 can climb 50,000 feet in less than 60 seconds. The relatively low aircraft weight, compared to wing area, made the Eagle not just fast, but also highly maneuverable, creating a near perfect platform for air-to-air combat.

Produced in both single and two-seat variants the F-15's complex avionics includes the sophisticated APG-63/70 Pulse-Doppler radar system allowing the aircraft to acquire and track targets at distances greater than 120 nautical miles. The F-15 can be armed with a number of different weapons packages depending upon the intended mission. In the air-to-air role, the Eagle's internal M61A1 20 mm Gatling gun can be augmented by radar-guided AIM-7F/M Sparrow missiles and/or AIM-120 AMRAAM Advanced Medium Range Air-to-Air Missiles as well as heat-seeking AIM-9L/M Sidewinders. In the ground attack mode, the aircrafts ability to carry 16,000 pounds provides for a wide array of ordinance options.

In 1991 USAF F-15's deployed to the Persian Gulf in support of Operation Desert Storm accounted for 36 of the 39 Air Force air-to-air victories. Two-seat F-15E Strike Eagles were used with great success to search out and destroy "Scud" ballistic missile launchers and concealed artillery sites.

Expected to serve in the United States Air force until 2025, the F-15, with its record of 100 aerial victories without a single loss in conflicts from the Persian Gulf to Kosovo, is one of the most successful fighters in history of aviation.

On display at the museum is F-15, S/N 76-0008. It arrived at the museum on May 11, 2006 from its last assignment at Sheppard Air Force Base, TX, where it served as a training aircraft. This aircraft is on loan from the NMUSAF.