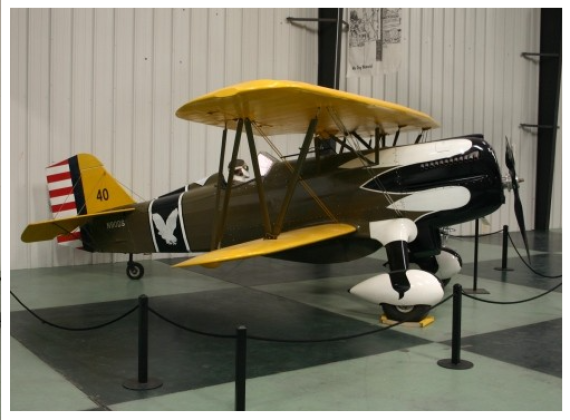 With its sleek lines and powerful 600 horsepower inline engine, the Curtiss P-6E fighter represents the pinnacle of 1930’s era bi-plane design. In the midst of the Great Depression, budget constraints limited the United States Air Corps to only 46 of the trim fighters. Never used in combat, the aircraft holds the distinction of being the last bi-plane fighter intended for front line service ordered by the United States.

Production P-6Es were delivered to the three fighter squadrons, the 17th, 33rd, and the 95th. March Field Air Museum’s P-6E 32-240 is a 7/8 scale replica. March Field’s P-6E appears in the “Snow Owl” livery of Captain Ross G. Hoyt, Commanding Officer of the 17th Pursuit Squadron, 1st Pursuit Group, based at Selfridge Field, Mich. in 1933. The Snow Owl engine cover markings were applied for participation in the 1932 Air Races. Note the talons on the wheel covers. The closed covers caused problems when operating off dirt and grass fields in wet weather and in winter. Mud and snow would build up inside the covers. As a result, the outboard portion of the covers were removed, leaving the wheel uncovered.

The last eighteen P-6Es were retired from the service in 1939, mostly donated to flying schools as non-flying training aids. The only original P-6E still in existence is in the collection of the National Museum of the United States Air Force in Dayton, Ohio.

Powered by a Chevrolet V-8 engine the museum’s P-6E 32-240 was constructed and flown by Donald Sauser, a former USMC pilot. Following his death, his wife presented the plane to the museum in 2002. This aircraft is owned by March Field Air Museum.