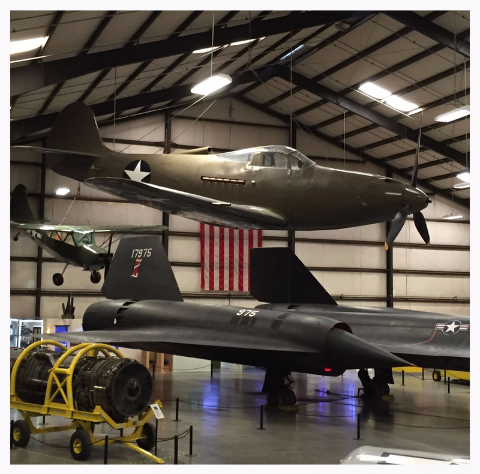 A product of Bell Aircraft, Buffalo, New York the P-39 Airacobra was designed in response to a 1937 US Army Air Corps request for a high-altitude interceptor. The resultant single-seat, low-wing, single-engine aircraft featured a combination of unique design elements. Tricycle landing gear, side entry doors and a mid-fuselage mounted Allison V-1710 12-cylinder engine with a 20 or 37-millimeter cannon firing through the propeller shaft. This created an unusual mix and met with varied success.  Additional armament consisted of two .50 caliber machine guns mounted in the nose, four .30 caliber machine guns mounted in the wings and an externally carried 500-pound bomb.

A total of 9,585 Airacobras were built during the war, serving in combat in Alaska, the Mediterranean, Europe and the Pacific. Never popular with U.S. pilots, its lack of an efficient turbo-supercharger contributed to poor high-altitude performance., The aircrafts’ most successful service was with the Soviet Air Force.

In Soviet hands, 4,773 Airacobras, or its variants obtained through the Lend-Lease program. helped to defeat the Germans in the hotly contested skies over the Eastern Front.  Flown to Alaska, American P-39s were repainted with Soviet red stars and handed over to Russian pilots who flew them across the Bering Strait to Siberia and on into combat. The Soviets found the P-39 to be an effective fighter, especially after the .30 caliber machine guns, which pilots referred to as “paint scratchers,” were upgraded to more powerful .50 caliber weapons.  Aleksandr Pokryshkin, of the 16th Guards Fighter Aviation Regiment, scored 47 of his 59 victories in P-39s, making him the highest scoring P-39 fighter pilot of any nation, and the highest scoring Allied fighter pilot using an American fighter.

The March Field Museum's P-39 is a bit of a hybrid constructed of a Q model, serial number 42-2000, manufactured by Bell Aircraft in Buffalo, New York, and delivered to the US Army Air Force on June 23,1943 and P-39 elements recovered from the jungles of New Guinea in the mid-1970s by aircraft collector David Tallichet. Aircraft 42-2000 served in the 339th Fighter Bomber Group at Walterboro, South Carolina; 430th Base Unit in Ephrata, Washington; and the 464th Base Unit in McChord, Washington. Our P-39 is on loan from the NMUSAF, it was presented to the museum in 1985