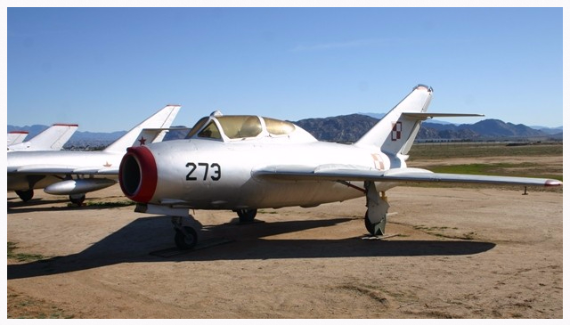 The Mikoyan-Gurevich MiG-15 was a one of the most famous jet fighters of all time. Developed for the USSR by Artem Mikoyan and Mikhail Gurevich the MiG-15 was the first successful swept-wing jet fighter.  It achieved eternal fame in the skies over Korea, where early in the war, it outclassed all U.S. fighters. The MiG-15 and the F-86 Sabre were the best fighter aircraft of the Korean War.

The MiG-15 also served as the starting point for development of the more advanced MiG-17 which would oppose American fighters over Vietnam in the 1960s. Believed to have been one of the most numerous jet aircraft ever made, over 12,000 MiG-15s’ were built. Licensed foreign production perhaps raised the total to over 18,000.

The museum’s MiG-15 was donated by Jesse Siglow.  It is the two-seat trainer version of the aircraft, code named “Midget” by NATO.