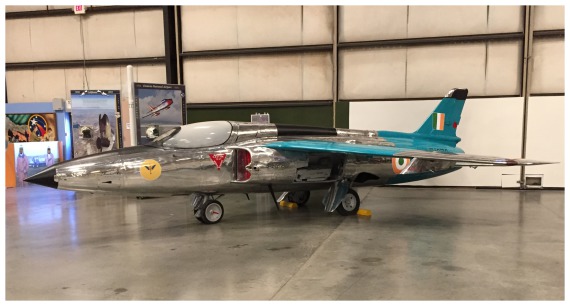 Designed in the mid-1950s by W.E.W. Petter as a low-cost alternative to increasingly expensive and overly sophisticated military aircraft, the Gnat is a tiny, subsonic, single-seat, swept-wing fighter and trainer. Developed for production by Folland Aircraft Ltd United Kingdom, the Gnat design permits the aircraft to be constructed and maintained cheaply, by nominally industrialized countries without extensive specialized tools.

With excellent performance capabilities, a top speed of 695 mile per hour and a service ceiling of nearly 50,000 feet, the little aircraft became a favorite of everyone who flew it. Although not used as a fighter by the Royal Air Force the Gnat became a versatile trainer and the star of the RAF Red Arrows Aerobatics Demonstration Team. Armed with two 30mm cannon, the Gnat's most noteworthy achievement came as a fighter for the Indian Air Force. In repeated conflicts with Pakistan between 1965 and the early 1970's, the Gnat became known as the "Sabre Slayer" for its success against the Canadair Sabre, a foreign built variant of the U.S. F-86.

March Field Air Museum’s Gnat E1076, was manufactured by Folland and assembled by Hindustan Aeronautics Limited before serving with No. 2 Squadron, the “Winged Arrows” of the Indian Air Force during the Indo-Pakistan Wars of 1965 and 1971. In 1971, a young Indian Air Force fighter pilot Flight Lieutenant V P Vadera flew E1076 on 20 combat missions during the conflict. In Vadera’s own words the Gnat “was the most feared of fighters!”

Following the conflict, in April 1972, Flt Lt Vadera was returning from a Firing Range sortie in E1076 when he reached to lower the speed brakes in preparation to land. Finding the lever loose, he realized the lug connecting the Teleflex cable to the undercarriage push/pull rod had worked free, likely due to the vibration from firing the aircraft’s cannons.

Quickly running through the emergency checklist, Vadera tried everything from rolling the aircraft upside down to pulling negative ‘G”s to force the landing gear to deploy. Nothing worked. Standard procedure required he eject, ensuring his own survival but guaranteeing the destruction of E1076. Advised by his Flight Commander to eject, Vadera, decided to try and save the aircraft by bringing it in for a belly landing. 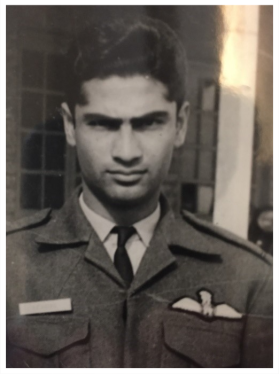 Flt Lt Vadera burned off the Gnats fuel before gently bringing E1076 in for a smooth landing. As the aircraft slid down the runway the right drop tank sheared off, spinning the Gnat into the dirt next to the runway where it came to a slow stop with minimal damage.

Aware that the Gnat still had live ammunition on-board that could go off at any second, Flt Lt Vadera hopped out of the cockpit and took cover in a nearby ditch. When emergency crews arrived, they found the empty aircraft peacefully waiting with its confident young fighter pilot relaxing nearby.

Without Flt Lt Vadera’s incredible courage and exceptional piloting skills the aircraft would not have survived to be imported into the United States by the Military Aircraft Recovery Company who donated it to the museum.

V P Vadera retired from the Indian Air Force in 1992 at the rank of Group Captain. He continued his flying career in Civil Aviation until finally retiring in 2018 with a total of 47 years of service. Today, he continues his contributions as a simulator Flight Instructor with AIRBUS GROUP INDIA.