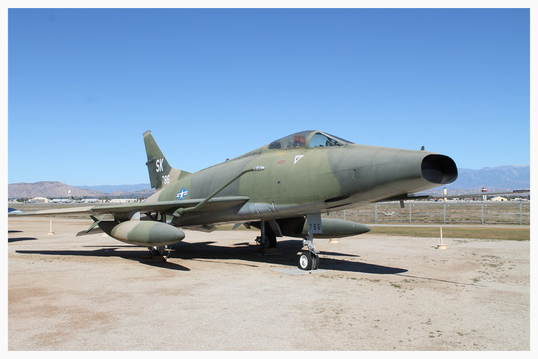 The F-100 was the first of the "Century Series" fighters developed from the North American’s F-86 "Sabre." This single-seat, single engine fighter-bomber was the first production aircraft to fly faster than the speed of sound in level flight, setting the world record in 1955 of 822.1 mph. Over two million engineering hours were spent incorporating advanced avionics, aerial refueling capabilities, structural refinements and increased ordinance payload. Black boxes were installed on the yaw and pitch control axis to eliminate stability and control problems at certain speeds. The F-100 was the last U.S. fighter designed with the air intake in the nose.

The Air Force Demonstration Team-the Thunderbirds, flew the F-100 from a 1956 to 1963, becoming the first aerobatics team to fly supersonic aircraft. After temporary use of the F-105 the team returned to the F-100D until 1968.

The F-100 saw extensive service in Vietnam with the Tactical Air Command launching Falcon, Sidewinder and Bullpup missiles or dropping from 5,000 to 7,000 pounds of bombs, more than that carried by most bombers in WW ll. They were used as interceptors with the Aerospace Defense Command in the early 1960's and flew with NATO air forces in the 1970's. After their primary service life many were used as target drones.

The museum's F-100C, serial number 54-1786, was delivered on September 24th, 1955 to the 450th Fighter Defense Wing, Foster AFB Texas. The aircraft had assignments in Georgia, Arizona, Nevada, Texas, Vietnam, and its final assignment was at Tulsa, Oklahoma.  It was retired in 1975 and moved to storage at Davis Monthan AFB, Arizona before it was acquired by the March Field Air Museum. This aircraft is on loan from the NMUSAF