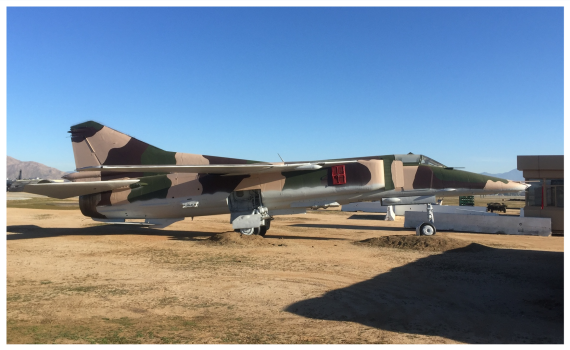 The Mig-23 came from the successful design bureau of Artem Mikoyan and Mikhail Gurevich. Meant as a point defense fighter, the Flogger offered a powerful radar, an infrared search and track system, a selection of radar and infrared guided weapons and tremendous speed (Mach 2.35) to counter its adversaries. Designed in 1964-66 as a successor to the MiG-21.

In addition to a much more powerful engine, the MiG-23's most significant new feature was its variable sweep wing. Like the USAF's swing-wing F-111, the sweep of the wings could be changed in flight. Fully spread, this gives a shorter takeoff/landing roll while carrying a heavier weapons load. With the wings fully swept back, the MiG-23 has greater speed. The wing has three sweep settings: 16, 45, and 72 degrees.

The prototype first flew in April 1967 and MiG-23s began entering operational service in 1971. The aircraft is in widespread use in Eastern Europe and the Middle East. The MiG-23/27 FLOGGER series of aircraft has been used extensively by the former Soviet Union and its Warsaw Pact allies including Poland, Hungary, Bulgaria, East Germany, Rumania, and Czechoslovakia. Other countries including Libya, Syria, Egypt, India, Cuba, Algeria, Iraq, Afghanistan and North Korea have imported FLOGGERS.

The MiG-23 series served as fighter-interceptors, with a secondary capability of ground attack. The MiG-23BN and MiG-27 were fighter-bomber variations. The Flogger B is a standard interceptor. Other versions of this aircraft are: C--two-seater; G--improved interceptor; and E--export. The MiG-23MLD FLOGGER K version was a modification of the MiG23ML FLOGGER G and incorporated improved avionics, armament, and aerodynamic features. The MiG-23MLD is the most advanced version of the Flogger. It features a different identification-friend-or-foe system, a more advanced missile capability and a distinctive notch in the leading edge of the wing to improve flight characteristics.

There are many similarities between a MiG-23 and a MiG-27. Based on the MiG-23, the MiG-27 introduced simplified intakes, a two-stage afterburner nozzle, an extra hardpoint and a strengthened undercarriage to allow the carriage of over 8800lb of ordnance. The most distinctive feature of the MiG-27 is that its 'duckbill' nose contains a laser rangefinder and other sensors allowing for all weather operations, as well as tactical recon using recce pods.

The museum's MiG-23 is painted in the colors of the Iraqi Air Force and has the duckbill nose configuration that is normally seen on MiG-27's. The Mig-23BN Flogger H was donated by Lillie Hornak, of Palm Springs, CA.