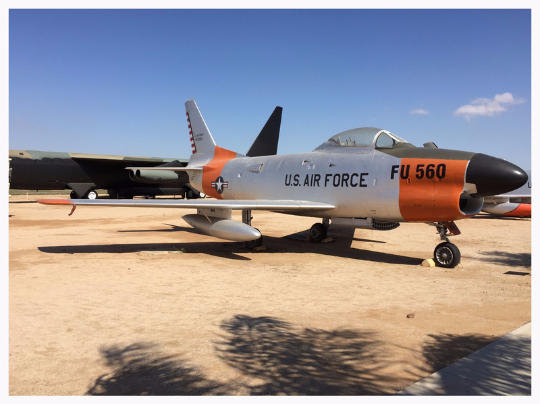 A variant of the famous Korean War F-86 Sabre swept-wing, single seat, jetfighter, the F-86L is an improvement of the USAF F-86D Sabre all-weather fighter. Significantly different from earlier F-86 models, D/L Saber’s share only 25% commonality with earlier models. A wider fuselage and longer airframe, an enlarged tail surface and the AN/APG-36 all-weather radar fit snugly inside a radome extending from the aircraft nose above the engine air intake gives the F-86 D/L models a distinctive silhouette.  Unlike its forbearers, the F-86D/L carried no machine gun or cannon armament instead relying on an under-nose tray containing 24 2.75-inch “Mighty Mouse” unguided folding-fin aerial rockets designed to launch in a barrage against enemy bombers.

By the mid-1950’s, in response to USAF requests to counter a potential attack by Soviet bombers, the Massachusetts Institute of Technology's Lincoln Laboratory developed an integrated radar-controlled air defense system using a large, high-speed ground-based computer connecting air surveillance data from ground radar installations to airborne interceptors using an automated datalink. The SAGE (semi-automatic ground environment) system permitted ground-based Weapons Controllers in Air Defense Centers throughout the US to transmit control directions including headings, altitudes and speeds to receivers aboard US interceptors guiding them to the attacking bombers. No voice instructions were used, the AN/ARR-39 datalink automatically positioned the interceptor for attack.

In May of 1956, 981 low-time F-86D interceptors were withdrawn from service one-by-one and fitted with the new radios, radars and data receivers needed for the SAGE upgrade. The aircraft had their wingtips lengthened by 12 inches, leading-edge extensions with slats were installed for better high-altitude performance along with a re-designed cockpit. As the aircraft returned to service, they were given the new designation F-86L.

The first complete conversion joined the USAF Air Defense Command in May of 1956. The active service life of the F-86L was very short, by 1960 Air Defense Command had replaced the F-86L’s with SAGE capable Convair F-102 & F-106 delta-wing interceptors. The entire inventory of F-86L’s were transferred to National Guard Units or retired. By 1965 even the National Guard F-86Ls were withdrawn from service.

The museum’s F-86L, serial number 50-0560 was delivered to the Air Force 3555th Fighter Training Wing in December 1952 as a “D” model. Undergoing conversion in 1957, it was assigned to the re-designated 3555th Combat Crew Training Wing. Three years later, 50-0560 was transferred to Norton AFB, California and retired. Used as a static display at Oro Grande Park the aircraft was salvaged and restored by the March Field Air Museum in 1996. F-86L 50-0560 is currently displayed in the livery of the 3555th Combat Crew Training Wing, its first assignment as an “L” model. This aircraft is on loan from the NMUSAF