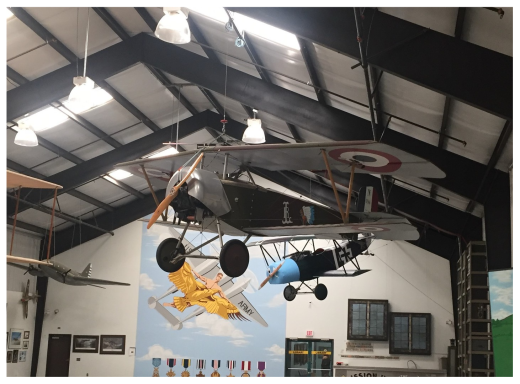 In the first year of the Great War, technological superiority in aircraft design and aviation associated equipment allowed the Imperial German Flying Corps to sweep Allied aircraft from the skies in what became known as the “Fokker Scourge.” Synchronized machine guns designed to fire through the propeller of the fastest and most maneuverable aircraft made French, Belgian and English pilots’ easy prey for the first generation of German air aces. Only the introduction of the single seat fighter the Nieuport 11, in January of 1916 brought German dominance to an end.

Originally designed for racing, the diminutive Bebe (Baby) with its upper wing mounted machine gun and state of the art technology, most specifically the use of ailerons instead of wing warping for rapid maneuvering, allowed the Allies to meet the Germans on an equal basis. Many of the First World War’s greatest pilots Charles Nungesser and George Guynemer flew Nieuports, as did Kiffin Rockwell of the famed Lafayette Escadrille.  He was the first American to shoot down an enemy aircraft in combat. Although replaced by more advanced models after only a few months, hundreds of Nieuport 11s provided vital service at a time when their contribution to the Allied cause was most needed.

The Museum’s Nieuport 11 is a 7/8 scale replica bearing the markings of the legendary ace Raoul Lufbery.  Born in France, Lufbery emigrated to the USA as a child.  When World War I broke out he returned to his native land and joined the Foreign Legion.  After being wounded he applied for pilot training. He would shoot down 17 German planes with the Lafayette Escadrille. Lufbery was killed in action in May of 1918.