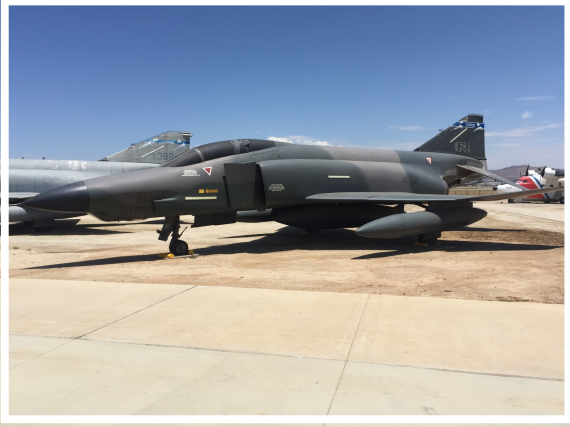 The F-4 was a two-seat, twin-engine tactical fighter designed to cover the entire tactical mission; close air support, interdiction and air superiority. Developed in 1953 by McDonnell Aircraft Corporation for the U.S. Navy. By the early 1960s, the USAF recognized the need for more tactical reconnaissance aircraft to reinforce the RF-101s then in service. The RF-4C development program began in 1962, with the first production aircraft making its initial flight on May 18, 1964. The Air Force officially accepted a total of 499 RF-4Cs.

The RF-4C can carry a variety of cameras in three different stations in its nose section. It could take photos at both high and low altitude, day or night. The RF-4C carried no offensive armament, although during the last few years of its service some were fitted with four AIM-9 Sidewinder missiles for defense.

There are three basic systems in the RF-4C: side-looking radar to record high-definition radar pictures of terrain on either side on film; infrared detector to locate enemy forces under cover or at night by detecting exhaust gasses and other heat sources; forward and side-looking cameras including panoramic models with moving-lens elements for horizon-to-horizon pictures. To light objects at night, photo flash cartridges are ejected from the fuselage. The systems are operated from the rear seat. Used extensively in Viet Nam and Desert Storm, the Air Force continued using the RF-4 until 1998.

The museum's RF-4C is serial number 63-7746, delivered to the Air Force in August 1965 and assigned to Holloman AFB, New Mexico. Attached to the 117th Tactical Reconnaissance Wing, Alabama Air National Guard, then the 187th TRG, the 67thTRW/45th TRS, the 155th TRG, Nebraska ANG, and finally to the 163rd TRG, California ANG, March AFB. It was retired in August 1996 with over 6,000 flight hours and towed to the museum. It is substantially intact, including optics, avionics, ejection seats, and engines. This aircraft is on loan from the NMUSAF