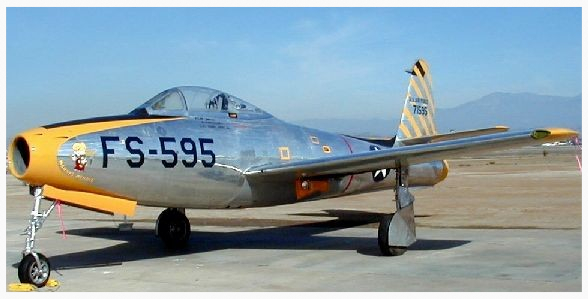 A descendant of the P-47 Thunderbolt, the F-84 was an in-flight refuellable fighter-bomber and the last straight-wing, subsonic fighter produced by the US. Production of the "C" model began in May of 1948. Features of the "C" model are its tri-cycle landing gear, wing tip fuel tanks, 6 x .50 Cal. machine guns, and the Allison J-35 turbojet rated at 4,000lbs. thrust. First flown at Muroc Flight Test Base, the new plane established a new U.S. national speed record of 611 mph in September 1946. The ribbed canopy was retrofitted as an in-service modification; photos of F-84Cs, as built, indicate that early F-84s had clear canopies.

Two F-84Es fitted with probe equipment and using air refueling, made an experimental nonstop flight across the North Atlantic from England to the United States in September 1950. F-84Gs incorporated in-flight refueling equipment with a wing receptacle in the port wing for use with the "flying boom" system. They also had autopilots, a new gun sight, instrument landing system and revised armament with up to 4,000 pounds of external stores including atomic capability. In 1953, 17 planes of the 81st Fighter Wing flew nonstop from Georgia to the United Kingdom, refueled in route by KC-97s, a distance of 4,485 miles. The same year, other F-84Gs completed the longest mission in the Korean War, flying from Japan to the east coast of North Korea, just 30 miles south of the Manchurian border.

The aircraft at the March Field Museum is serial number 47-1595. It was manufactured by Republic Aviation in Farmingdale, New York and delivered to the Army Air Force on 10 December 1948. It served in the Aerospace Defense Command and Air Training Command until retired in November 1953.  Our F-84C was used at the Glendale College, Glendale, Ca., as a technical instruction airframe for 27 years before being donated to the March Field Museum in 1982. This aircraft is on loan from the NMUSAF