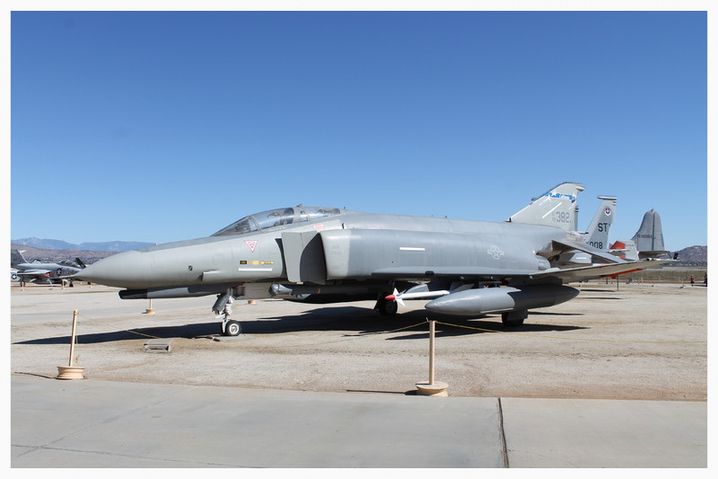 The F-4 was a two-seat, twin engine tactical fighter designed to cover the entire tactical mission – close air support, interdiction and air superiority. Originally developed in 1953 by McDonnell Aircraft Corp. for the U.S. Navy, the aircraft was delivered modified to Air Force requirements in 1963. The first F-4E was delivered to the Air Force in October 1967. This model, with an additional fuselage fuel tank, leading-edge slats for increased maneuverability, and an improved engine, also has an internally mounted 20mm multi-barrel gun with improved fire-control system. The F-4E, which was equipped with leading-edge maneuvering slats and weapons and radar controls that were optimized for dogfighting, vastly improved the Phantom's air-to-air capabilities. The F-4E changes in avionics, new wings (more forgiving in stalls and spins caused by harsh maneuvers with heavy bomb loads) and the addition of the M61 20mm cannon remained the basic airframe for the follow-on version in the Phantom production.

The F-4E was flown by the U.S. Air Force Demonstration team, the Thunderbirds, from 1969 through 1974.  The large and noisy Phantom was an excellent aircraft that performed and thrilled crowds all over the world.  Due to the fuel shortage in the 70s, the Thunderbirds traded the fabulous Phantom for the smaller T-38 Talon.

The museum F-4E, serial number 68-0382, was delivered in 1969 and assigned to the 36th Tactical Fighter Wing, then the 86th TFW, the 347th TFW and finally was last flown here at March AFB by the 163rd Tactical Fighter Group, California Air National Guard. Retired in 1993 due to structural damage to the right engine nacelle with over 5,000 flying, hours, the plane is substantially intact, including avionics, ejection seats and engines and was towed to the museum area. This aircraft is on loan from the NMUSAF