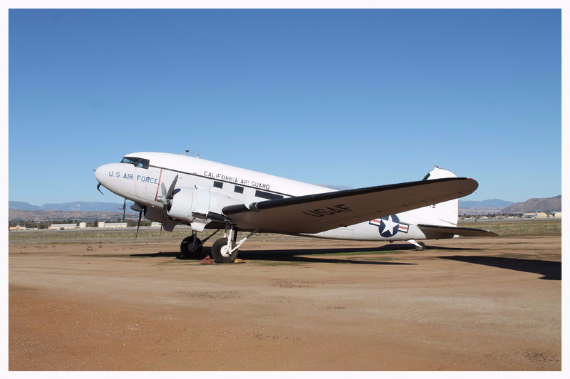 The Douglas C-47 Skytrain or Dakota is a low-wing, twin-engine, all metal, military transport aircraft developed directly from the Douglas DC-3 civilian airliner. Engineered by a Douglas Aviation team, led by chief engineer Arthur E. Raymond, its simple, reliable design revolutionized air transport making it one of the most significant airliners in aviation history. First flown on December 17, 1935, by 1941 the DC-3 entered military service as the C-47 or as the R4D, its US Navy designation. Modifications included strengthening the floor, installing a cargo door and fitting two Pratt & Whitney R-1830 Twin Wasp radial engines to improve high-altitude and single engine performance allowed the C-47 to become the most versatile cargo aircraft of the war.

In the words of General Dwight D. Eisenhower "The atomic bomb, the bazooka, the jeep and the DC-3 were the four things that won the war for the Allies…" Over 10,000 C-47 aircraft were produced for use in every theater of the war, from flying "The Hump" in the China-Burma-India Theater to dropping paratroopers in Europe. The C-47 also carries the distinction of being the only aircraft ever licensed for production in the Soviet Union. As a supply plane, the C-47 could carry up to 6,000 pounds of cargo or hold a fully assembled jeep or a 37 mm cannon. Twenty-eight fully equipped soldiers could be transported in its standard personnel configuration or, as a medical airlift; the C-47 could accommodate fourteen stretchers and three nurses.

Widely modified, seven basic versions of the C-47 were built, and the aircraft was given at least 22 designations before its service life ended; including the AC-47D gunship nicknamed "Puff the Magic Dragon" (armament consisted of three 7.62mm miniguns firing 6000 rpm each), the EC-47 electronic reconnaissance aircraft, the EC-47Q antiaircraft systems evaluation aircraft and the C-53 Skytrooper.

March Field Air Museum's VC-47A serial number 43-15579 was manufactured by Douglas Aircraft in Long Beach, California and delivered to the Army Air Force on April 12, 1944. It served in the Air Transport Command before it was transferred to the California Air National Guard. Until its retirement in October of 1972 43-15579 carried the nickname "Grizzly," and served as the governor’s personal aircraft during the tenures of governors Earl Warren, Goodwin “Goodie “Knight and Edmund G. "Pat" Brown. After acquisition by the museum, the aircraft was disassembled with the fuselage being used as a trailer, it was brought to the museum on freeways where it was re-assembled and restored. This aircraft is on loan from the NMUSAF