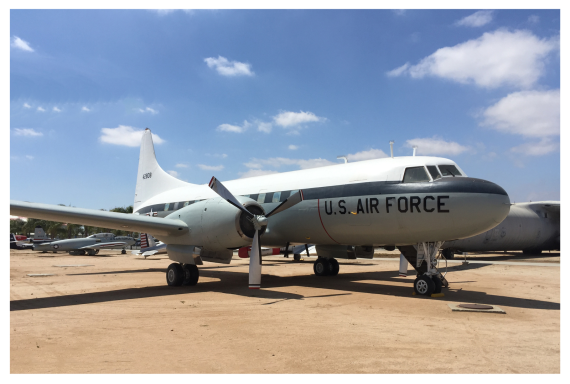 The twin-engine, tricycle gear C-131D was a military transport version of the civilian Convair-Liner 340 built by General Dynamics. The first pressurized twin-engine air-evacuation, cargo, aircrew training and troop transport ordered by the U.S. Military Air Transport Service, it could carry 37 seated passengers or 27 stretchers. A standard integral stairway that folded into the aircraft was located on the right side. A large hydraulically operated door, opening upwards was provided on the left side.

The standard T-29 version had 14 fully equipped training stations for students of advanced navigation. The navigation/bombing trainer model had accommodations for six students and two instructors.

The museum’s C-131D, serial number 54-2808, was delivered to the Air Force on October 19 1954. It served as a VIP transport in the Military Transport Command with the Special Missions-Medium, at Bolling AFB, D.C. until 1956 when it was re-assigned to Langley AFB, Virginia. In 1964, the aircraft was transferred to Andrews AFB, Maryland. In 1975, the aircraft was transferred to the Air Guard and sent to Jackson Airport, Florida. 1989 saw the end of 54-2808s service life, the aircraft was retired from active duty and flown to March Field Air Museum. This aircraft is on loan from the NMUSAF