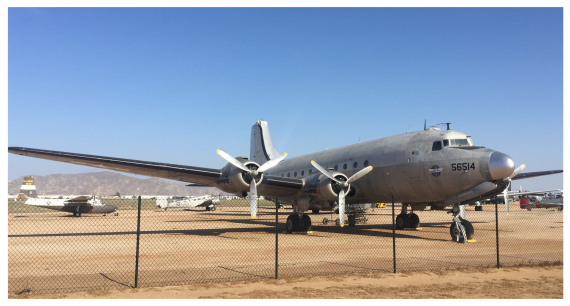 The Douglas C-54 was the U.S. military version of the Douglas DC-4 airliner. The DC-4 had not yet entered commercial service when the United States Government commandeered the Douglas production line on December 5, 1941. Wartime expediency demanded speed or caution, no prototype was built, the first production aircraft made its first flight February 14, 1942.

To meet the military’s more stringent needs, the DC-4 was given a cargo door, stronger floor, cargo boom hoist and larger wing tanks. First flight of the military C-54 occurred on March 26, 1942. During the war years, 1242 C-54s were delivered with a wide variety of modifications. A few of the major ones were: the C-54A, the original, fully militarized model capable of lifting 50 soldiers or 32,500 pounds of cargo, the C-54E, with larger Pratt & Whitney engines, bigger fuel tanks for longer range and a specially designed cabin for quick conversion between passenger and cargo roles. Post-war the C-54M, which was a C-54E stripped out to serve as a coal-carrier during the Berlin Airlift; the EC-54U an electronic counter-measures platform, the JC-54D, which was modified for missile nose cone recovery and at least 14 sub-variants built for the US Navy. There were numerous other variants which performed countless other roles, from VIP transport to multi-engine training.

The Skymaster gained its greatest fame flying over the “Hump” to China during WW 2 and supplying Berlin during the Russian blockade from June 1948 to September 1949. The C-54 offered sterling service for both the USAF and the US Navy, the aircraft was not fully retired until the late 1960’s. Ex-military Skymasters became popular as cargo transports and fire bombers, and many are still in active use around the world in these roles.

The museum’s C-54 began its life as a C-54 on May 31st, 1945, when it was delivered to the USAAF (serial number 42-72636). Transferred to the US Navy that same date, it was redesignated from C-54D to R5D-3 with Bureau Number 56514.  By June the aircraft served in VRE-1 the first casualty evacuation squadron ever formed. The aircraft evacuated wounded from the Battle of Okinawa.

In addition to the pilots, flight nurses like Jane Kendeigh, the first Navy nurse to land at Okinawa, provided critical care on the flights. During the campaign for Okinawa, Navy, Marine Corps, and Army Air Forces aircraft evacuated 16,599 casualties, with nearly 60% of them flown out by VRE-1. 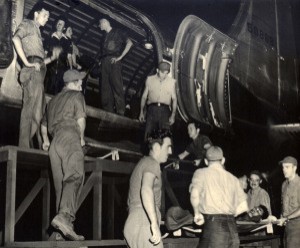 Casualties from the Battle of Okinawa 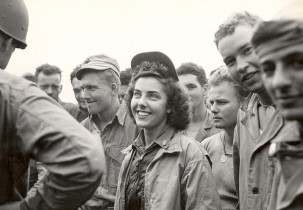 Serving until 1965, it sat in storage nearly seven years before becoming a fire bomber at Hemet-Ryan airport from 1973 until 1994 when it flew to the museum.