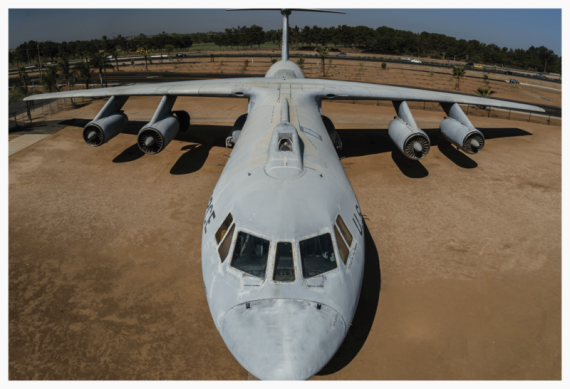 In over forty years of service, stretching from the jungles of Vietnam to the
deserts of the Persian Gulf, the Lockheed C-141 Starlifter the Air Force’s first
jet-powered, heavy-lift cargo aircraft has earned the title of Americas airlift
workhorse.

A product of John F. Kennedy’s first official order as President, the C-141
was designed to be a fast, long-range strategic and tactical transport capable
of delivering 60,000 pounds of cargo 3,500 miles while retaining the slow speed
capability to airdrop paratroopers and cargo while in-flight. Produced on-time
and under budget, Lockheed engineers gave the C-141 a high-mounted wing swept
back 25 degrees for high-speed performance, powerful flaps for low-speed
capability, four under-wing TF33 turbofan engines, integral wing fuel tanks, a
T-tail, externally housed landing gear, dual paratroop doors and rear-mounted
clamshell doors with an integral loading ramp for quick on and off loads.

In the following years, Starlifters supplied U.S. forces throughout the
world, aiding in humanitarian efforts and military conflicts in Grenada and
Panama and providing support to Israeli forces during several flare-ups in the
Middle East. In the first half of 1990, modified C-141Bs with 23-foot fuselage
extensions permitting an increased cargo capacity of 13 pallets, 205 troops, 168
fully loaded paratroopers or 103 litters for wounded and equipped with an aerial
re-fueling capability, were engaged in Operation Desert Shield. In an around the
clock strategic airlift push, C-141Bs landed in Saudi Arabia at an astounding
rate of one every seven minutes.

The last C-141 left the U.S. inventory in 2006 replaced by a new generation
of global airlift, the C-17 Globemaster III.

The museum's C-141B Starlifter serial number 65-0257, currently on loan from
the National Museum of the U.S.A.F., the “Spirit of the Inland Empire” entered
active service in 1966. Its assignments have included Travis AFB, CA. McCord
AFB, WA. Norton AFB, CA. and finally the 452nd Air Mobility Wing, at March.
After completing 44,130 flight hours 65-0257 retired and moved across the runway
to the March Field Air Museum on November 10, 1999.

According to the AF Historical Research Agency, Maxwell AFB, AL, this
aircraft had the following history:

- Manufactured by Lockheed Aircraft, Marietta GA and gained by the USAF on
27 May 1966.

This aircraft is on loan from the Air Force Museum, Wright Patterson AFB,
Ohio.