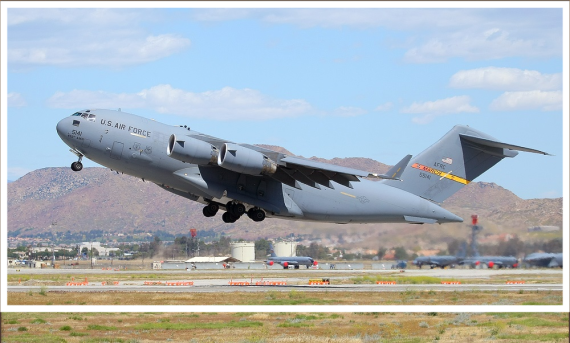 The Boeing (formerly McDonnell-Douglas) C-17 Globemaster III is the primary long-range, heavy lift transport in the United States Air Force. The aircraft first flew in 1991, with initial deliveries to the Air Force beginning in 1993 and fully operational status two years later in 1995.

The C-17 can carry a wide variety of loads in its cavernous cargo bay anywhere in the world as aerial refueling has made the range virtually unlimited. It can be configured for passengers, paratroopers, palletized cargo, medical evacuation, helicopters and vehicles including the M2 Bradley Fighting Vehicle and the M1 Abrams Main Battle Tank.

The USAF bought 224 C-17’s. Foreign customers for the Globemaster included Australia, Canada, India, the United Kingdom, NATO and several Persian Gulf states. All of the aircraft were built in Long Beach, California.

The museum does not have a C-17 on display but the 452nd Air Mobility Wing based at MARB operates nine C-17’s.