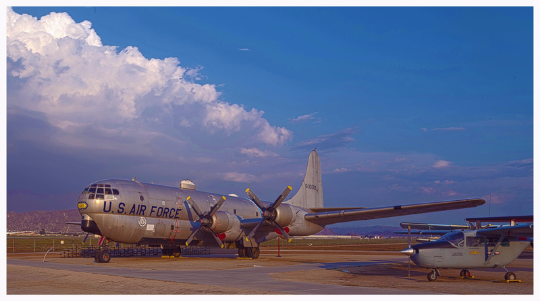 The KC-97, a first-generation aerial refueling tanker, was designed from the transport version of the B-50 Superfortress, itself a derivative of the B-29.

The C-97 was modified to have twice the internal volume of the B-50 by adding an extra underside fuselage section making the aircraft resemble an inverted "8". The entire cabin was pressurized and could carry 130 fully equipped troops or 80 stretchers. An electrically powered cargo hoist to lift and position loads ran the entire length of the fuselage. Refueling tanks and a flying boom were fitted to make the plane an air-to-air refueler.

Unfortunately, the KC-97 was too slow to refuel the new jet aircraft and had to climb to higher altitudes and begin a dive, speeding up just enough to refuel the jets as they descended. The twenty-eight-cylinder engines were no fun to overhaul since each engine had 28 cylinders 56 spark plugs! The KC-97 was soon replaced by jet powered tankers. Very successful as a first-generation tanker, elements of the aircraft design continued in service. The refueling boom configuration of the KG-97 is used in the KC-135 Stratotanker aircraft.

The museum's KC-97, serial number 53-363, was manufactured as a G model at the Boeing Aircraft plant in Seattle, WA. It was delivered to the Air Force on September 26, 1956. March Field Air Museum volunteers flew the aircraft from Davis-Monthan Air Force Base, Arizona, in July of 1980. This aircraft is on loan from the NMUSAF