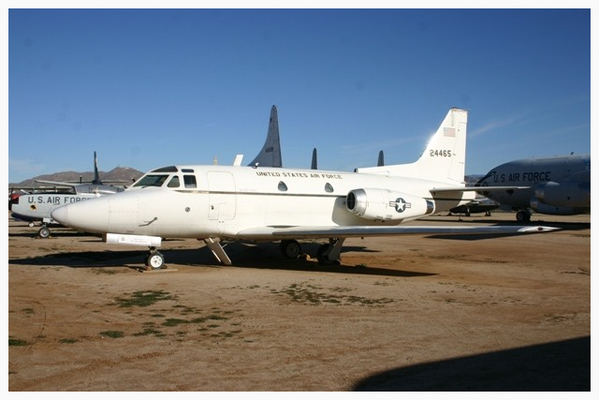 The CT-39 was based on the Rockwell Sabreliner 40 corporate-jet. The aircraft was intended to meet the USAF "UTX" requirement for an economical combat readiness trainer, a fast transport, and a utility aircraft.  Equipped with radar and LORAN navigational equipment the U.S. Air Force and Navy T-39's were used as navigator and F-105 crew trainers. The USAF Tactical Air Command had six B models equipped with a Doppler Navigation System and NASARR all-weather search and range radar as installed in the F-105 Thunderchief for F-105 crew training. The Navy used 36 D models for maritime radar indoctrination training.

The museum's CT-39A, serial number 62-4465, was the command aircraft of the late General Jerome O'Malley, commanding officer of the Tactical Air Command. The museum's T-39 was removed from the Air Force inventory and flown to the museum at March Air Force Base in May 1985 after General O'Malley was killed in the crash of another T-39 in Scranton, PA, in April of that year.

This aircraft is on loan from the NMUSAF