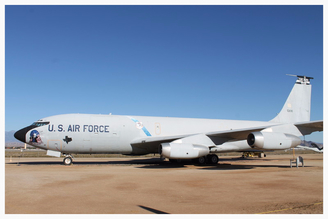 Based on Boeing 707 airframe, the KC-135 was the first totally jet powered, in-flight refueling aircraft. The C-135 models have served in a number of roles: Air Force One, Electronic Warfare aircraft, Weather, Reconnaissance, Airborne Command Post and special purpose aircraft.

The KC-135 is carries fuel in six wing and four fuselage tanks. All but 1,000 gallons can be pumped via the extendable boom at the rear of the aircraft into the waiting receivers. Aircraft requiring fuel line-up by following the rows of lights on the underside of the KC-135. The boom operator, lying prone in the rear fuselage flies the boom into the receiving aircraft's fuel receptacle.

Eighty troops or 25 tons of cargo can also be carried in the main fuselage. Seventeen KC- 135's were equipped as " Looking Glass" command aircraft for the Strategic Air Command. These aircraft acted as a mobile version of SAC headquarters at Offutt AFB. If ground stations were destroyed the “Looking Glass” could direct bombers and missiles for retaliatory strikes. Airborne command post aircraft could also act as emergency tankers. Until 1985, at least one Looking Glass aircraft was airborne at all times.

The museum's KC-135A, serial number 55-3130, christened "Old Grandad", was the thirteenth KC-135 manufactured and was delivered to the Air Force in August 1957.  During her 35-year career she refueled thousands of combat aircraft including many in Southeast Asia and the Persian Gulf. Retired as the oldest KC-135 in the fleet, “Old Grandad” arrived from Carswell AFB, TX, in December 1992.  It had a total of 14,107.5 flight hours. This aircraft is on loan from the NMUSAF