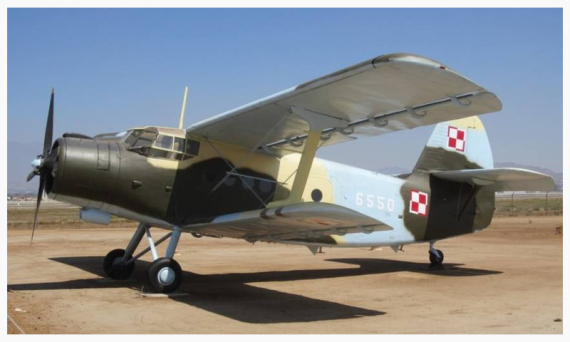 The "Anushka" ("Annie"), as it is known to Russian pilots, was designed just after WW2 to the specifications of the Soviet Ministry of Agriculture and Forestry, for service as a long-range bush plane to support forest ranger out-posts and to monitor the vast resources of the Siberian wilderness. More An-2’s were built than any other large biplane in history.

An-2's entered production in 1947, proving so capable they were immediately adopted by the military as a light (an arguable statement) utility transport. Shortly there-after, Aeroflot adopted it for use as a regional transport. Lightweight folding seats can accommodate passengers, up to 14 paratroopers, six stretchers or 4,520lbs of freight. The agricultural version has a 430-gallon liquid hopper or a 2,650 lb. dust hopper in the cabin with pumping and spraying equipment under the fuselage and wings. Floats can be fitted to the landing gear that can also carry up to 2,500 pounds of water scooped into the floats as the aircraft taxis on water as shallow as three feet.

More than 5,000 were built in the USSR until 1960 when production of the aircraft was transferred to their Warsaw Pact ally, Poland. Production continued there, without any significant changes in the design, until 1992 when the last major contract completed. An estimated 15,000 were built in Poland in six different variants. They were shipped in quantity to nearly every East European country, and every Russian ally in the world during the Cold War. Though the production line is closed, the factory in Poland still retains the tooling and occasionally produces "new builds" from stored assemblies. The airplane continues in production under license in the People’s Republic of China.

October 7th, 2000, An-2 s/n ANATDSR-IR-16550 model 1975, was donated to the museum by Mike Alex, a long-time volunteer and supporter of March Field Air Museum. It had been obtained from a small town in Mexico, Ejido Tierra y Libertad of Bahia de los Angeles B.C, which had claimed ownership after the aircraft had been abandoned there for many years.