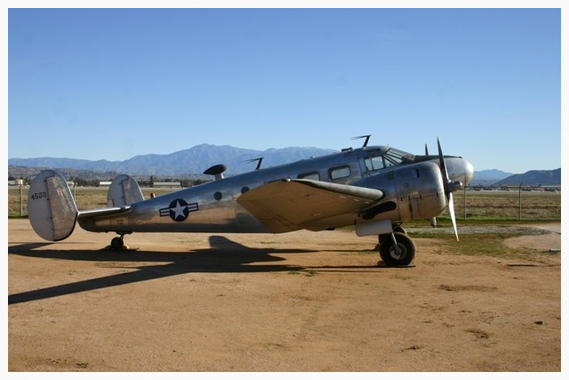 Beech Aircraft first introduced the Model 18 light, twin-engine, twin-tail, tail-dragger to the civilian market in late 1937. Originally a 6 to 11 place civilian executive transport, the aircraft became one of the most popular utility / cargo planes before WW 2 and a staple of civil transport after the war.  Powered by two Pratt & Whitney R-985 nine-cylinder engines that developed 450 hp each, the plane flew up to 212 mph over a range of 850 miles.

With the outbreak of World War II, the Army Air Forces ordered 11 aircraft. Quickly realizing their full potential, the newly designated C-45 was ordered in large quantities to provide the coming flood of new airmen with a suitable training aircraft. Although still mostly used as a transport, the C-45 was also produced in several specialized versions; the AT-7 navigation trainer, AT-11 weapons trainer and the F-2 photoreconnaissance.

The museum's SNB was a U.S. Navy aircraft, BUNO number 44588. In military use until 1960 it operated for a number of years under civilian registration before being flown to the museum on May 1, 1981, from Moore Field, TX, logging 10.1 flight hours. Total flight time for this aircraft is 13,400 hours. This aircraft is on loan from the NMUSAF