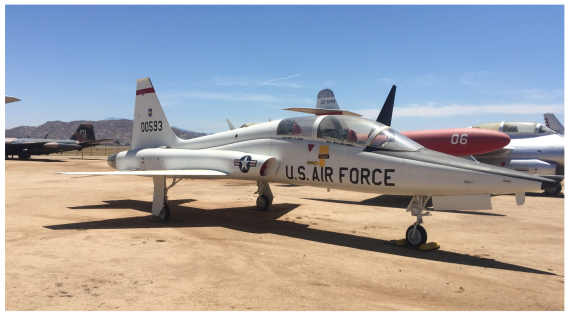 The T-38 Talon is a supersonic lightweight twin-engine training aircraft. The wings have no dihedral, no trim tabs or de-icing system and the tail plane is a one "all-moving" piece. The fuselage is made of aluminum, steel, magnesium, and titanium, shaped for supersonic speeds.

Popularly known as the "White Rocket", the T-38 has been the standard graduation pilot trainer for the Air Force since 1964, as well as a space-flight readiness trainer and transport for NASA. T-38s are used as chase planes for research and development and by USAF pilots who fly more complex, time-limited airframes (U-2, F-117, etc) to maintain flight currency. For seven years between 1975 until 1982 the USAF Flight Demonstration Team “Thunderbirds” used T-38 Talons. Prior to utilizing the F-16 Falcon US Air Force Aggressor Squadrons used F-5's to simulate enemy aircraft due to their comparability size and performance.

The newest version of the T-38 is the "C" model with a life span expected to reach 2020. The F-5 Tiger is the single-seat combat version and is very popular with developing nations because of its simple design, combat effectiveness and inexpensive price tag.

The museum T-38A, serial number 60-0593, was delivered in November 1961 to Webb AFB. It served at Tyndall AFB, Oklahoma, Moody AFB, Columbus AFB, Ohio and in 1974 arrived a Sheppard AFB, Texas where it retired in 1991.  This aircraft is on loan from the NMUSAF 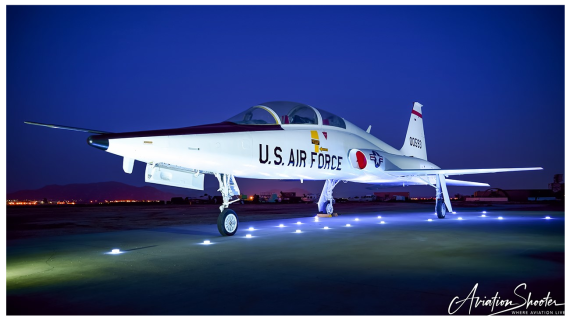