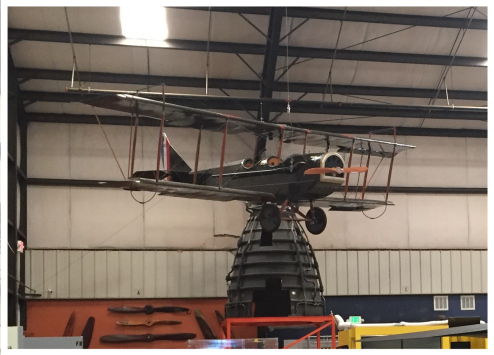 From the dusty training fields of the Great War to the bustling county fairs of middle America, the Curtis JN series expanded the boundaries of early aviation. Simplicity in airframe and powerplant design were the hallmarks of this single-engine, two place, bi-plane created by Glen Curtis and British engineer B. Douglas Thomas.

Jenny’s first saw active service in the arid deserts of the American southwest during the U.S. Army’s 1916 punitive expedition against Mexican revolutionary Pancho Villa. Primarily used for reconnaissance, the versatile biplane would reach its military zenith as a trainer. By 1917, an improved version of the Jenny, the JN-4, was being used to prepare Army Air Service pilots for U.S. entry into the First World War. Ultimately, 90% of all U.S. pilots received primary flight training on the JN-4.

In 1918, the first aircraft to land at the newly founded March Field was a JN-4 piloted by Lt. Harold Compere. In the ensuing years, the skies over Riverside would blacken with JN-4s, singly and in formations, as fledgling aviators learned their trade.

Post-war, the U.S. government released thousands of Jenny’s on the open market where they became the staple of the burgeoning barnstormer phenomenon. Surplus aircraft, and surplus pilots, traveled the country dropping in at county fairs and farmer’s fields offering air demonstrations and rides to a public fascinated by flight. For most of the nation, this would be its first real exposure to aviation.

By 1927 the U.S. Army Air Corps had retired the JN-4 while new civilian regulations set a standard for aircraft safety the venerable Jenny could not hope to meet. Today, out of the 6,813 produced, only an estimated 30 remain.

The March Field Air Museum’s JN-4D N593JN is a 67% scale flying replica built by Gary Stenkie, and purchased by the museum in 2018,