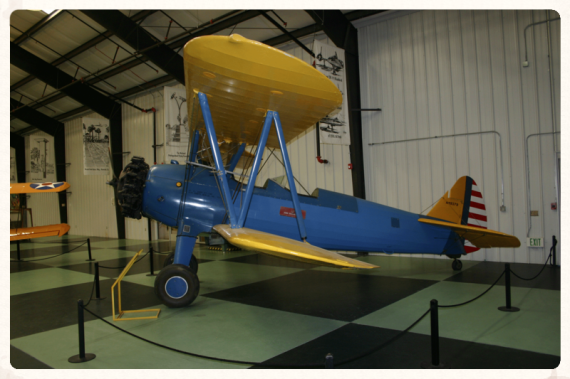 The PT-17 was a two-seat, radial engine, unequal span, forward staggered biplane. The PT-17 was the most prolific of the primary training aircraft of the USAAF. Often the first aircraft used in the three-phase USAAF pilot training program, more U.S. WW II pilots trained in Stearmans than in all other PTs combined. The wings features spruce laminated spars and ribs, duralumin channel struts, and steel tie-rod bracing. The ailerons of duralumin construction were on the lower wings only. The fuselage was rectangular welded chrome-molybdenum steel-tube, covered forward with metal panel and aft with fabric.

Built like a bridge, it was able to survive all aerobatics and most cadets. The tandem open cockpits had complete dual controls. Communication between the student in the front and the instructor in the rear was by rubber voice tubing into the ears of the student who answered with hand signals.

After the war the slow, biplane turned into an agricultural star. While most of the fast-moving sleek fighters and bombers became aluminum ingots, the wood, steel, and fabric trainers survived. Selling for 10 cents on the dollar the PT-17 became a crop-dusting staple. A single firm in Texas bought 42 for a bid of $55.56 each. By adding hoppers in the front cockpit and replacing the engines with surplus 450 hp Pratt & Whitney Wasp Juniors the veteran trainers found a new life as agricultural stars. Today, an estimated 2,500 Stearmans are still flying.