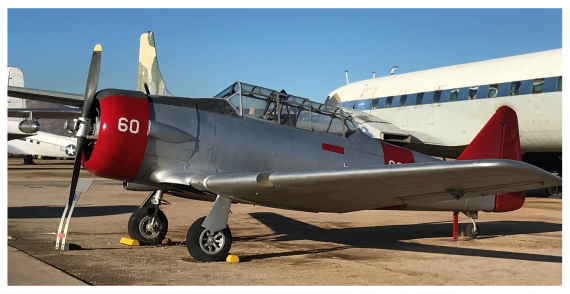 The North American Aviation SNJ-4 is the United States Navy version of the venerable AT-6 “Texan.” The single-engine, tandem cockpit monoplane was developed as a design modification from the BT-9 basic training aircraft first adopted by the United States Army Air Forces in 1935. In 1936 the Navy purchased40 AT-6 trainers. The aircraft were given the Navy designation SNJ, “S” for scout, ‘N” for trainer and “J” indicating the manufacturer: North American Aviation. Incomplete records show the production of a minimum of 15,000 AT-6/ SNJ variants from 1935 until the 1950’s with 2,400 being SNJ-4s.

In addition to the United States, the AT-6/SNJ served in an official military capacity as both a trainer and combat aircraft in the militaries of over 40 countries from 1935 until the late 1990s. Equipped with an arrestor-hook the SNJ-4C allowed Navy student pilots to learn the demanding techniques and complex skills required to take-off and land on a carrier deck. Simple, reliable and capable of performing intricate aerial maneuvers the AT-6/SNJ was a perfect advanced training aircraft and remains a favorite for demonstration teams even today.

The museum’s SNJ-4, Bureau Number 51360, was delivered to Naval Air Station Pensacola, Florida in 1943. The aircraft served in Florida and at NAS Glenview, Illinois before returning to Pensacola to retire 1957. with 5,833 hours. It came to the museum in 1982 with 5,883 hours on the airframe. In 2013, museum staff and volunteers returned SNJ-4 51360 to the WW2 U.S. Navy markings of its first assignment at NAS Pensacola.  This aircraft is on loan from the NMUSAF