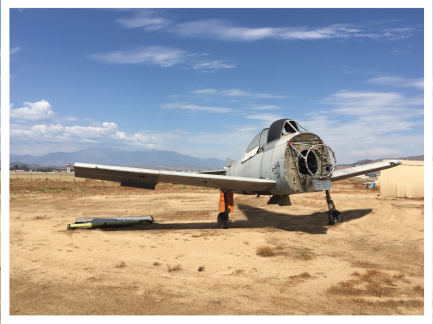 The T-28A Trojan is a conventional, low-wing, piston-engine aircraft built by North American Aviation as a replacement for the AT-6 Texan military trainer. It was used by the United States Air Force from 1950 until the early 1960’s and by the Navy until the 1980’s.

A very stable and reliable aircraft, the Trojan moved beyond training in a number of conflicts.  T-28s saw extensive service as ground attack aircraft in Southeast Asia being used by the South Vietnamese and Laotian Air Forces during the war. The T-28 bears the distinction of being the first fixed-wing combat aircraft lost in South Vietnam when Captain Robert L. Simpson and Lt. Hoa (SVNAF) of the USAF 1st Air Commando Group were downed by ground fire on August 28, 1962 while flying close air support.

The museum’s T-28A Trojan 49-1617 was purchased by the Mexican Air Force in 1950. The aircraft was donated by the California Air Heritage Foundation