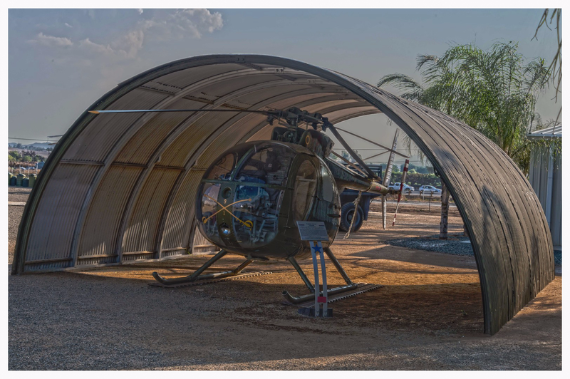 The Hughes OH-6A was designed for use as a military scout during the Vietnam war to meet the U.S. Army's need for an extremely maneuverable light observation helicopter (LOH program). Initially fielded in Vietnam in early 1968, the Hughes OH-6A was used for command and control, observation, target acquisition, and reconnaissance. The Cayuse was organic to division, brigade, and battalion size units. The four-passenger teardrop shaped "Flying egg" (six-passenger with rear seats folded-down) was a small, light, sturdy, a maneuverable helicopter, with very low drag.

The OH-6A Cayuse was quite effective when teamed with the AH-1G Cobra attack helicopter as part of what were known as "Pink Teams". The OH-6A "Loach" (for "LOH") would find targets by flying low, trolling for fire, then marking the target with colored smoke to lead in a Cobra, or "Snake", to attack. The Cayuse could absorb an extensive amount of small arms fire and still bring the crew home safely. The OH-6A could be armed with the M27 armament subsystem, the port (left) side mounting M134 six-barrel 7.62mm Minigun or a 40mm grenade launcher on the XM8 armament subsystem. In addition, an M60D 7.62mm machine gun could be mounted in the rear starboard (right) door opening. The OH-6A replaced the Korean era OH-13 Sioux and OH-23 Raven light observation helicopters.

The Hughes (model 500M) international military version was sold in ten countries and built under license in Italy and Japan. The Cayuse had a single articulated four-bladed main rotor and a metal two-bladed tail rotor. The OH-6A was powered by a single Allison T63-A-5A 285 hp turboshaft engine and had a cruising speed of 144 mph (125 knots).

This historical helicopter is rare and is a proud addition to the museum's collection. It 's restoration (non flying) was completed in 2004.  It is in the colors of the 1st/9th/C, the last unit to fly her in combat.  For more information on air cavalry, click here to link to Charlie Troop, 1st Squadron, 9th Air Cavalry, or, click here to link to Bravo Troop, 1st Squadron, 9th Air Cavalry. This little bird was also a member of the Silver Eagles Demonstration Team! It's assignment in 1973 after Vietnam was to the USAAPDT (U.S. Army Aviation Performance Demonstration Team), Ft Rucker.