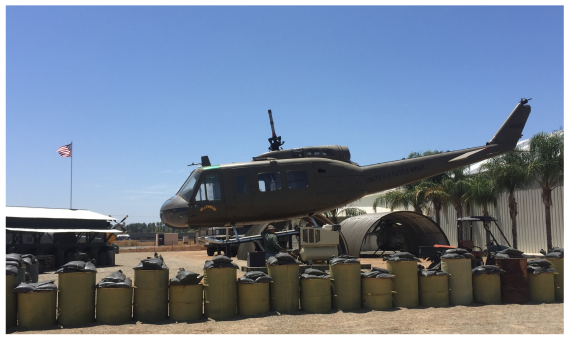 The iconic aircraft of the Vietnam War the distinctive wop-wop of the Huey's rotor blades stirs the memories of the generation that came of age during the turbulent 1960’s. Uniquely versatile, the multi-purpose UH-1 brought tactical flexibility to modern ground warfare. With the Huey's innovative design and rugged reliability, American commanders were able to strike whenever and wherever they wished. The UH-1 provided speed and surprise while retaining strong logistical support and the ability to adjust to the changing conditions of the battlefield.

One of the most successful aircraft designs ever built, the UH-1 grew out of the need to replace the cumbersome, mechanically complex helicopters brought into service after the end of the Second World War. Known as the "Huey" after the phonetic pronunciation of its initial model designation "HU-1", the aircraft was created by modifying a Bell Model 47 Sioux to provide enough room for seven soldiers or three stretchers. By 1962 the HU-1 had been re-designated the Utility Helicopter UH-1. The first helicopter produced in large numbers, the Huey was equipped with a turbine power plant driving a two-bladed, semi-rigid main rotor and a two-bladed, semi-rigid tail rotor taking the aircraft to speeds of over 100 mph.

In its first 15 years, over 11,000 UH-1's saw service in Vietnam. From the unarmed medical evacuation "Dust Offs" named for the clouds of grit kicked-up whenever they landed, to lightly armed "Slicks", nicknamed for their unencumbered external appearance, and the heavily armed "Gunships" with  combinations of offensively oriented machine guns and rockets, the UH-1 was the backbone of Army operations in Southeast Asia.

During its 50- year career, the UH-1 has served under some of the most adverse conditions imaginable, from the Arctic Circle to the most remote sunbaked deserts. Although all UH-1's have been retired from active military service in the United States, there are still hundreds in civilian use and serving in the armed forces of foreign nations.

On display at March Field Air Museum is UH-1D serial number 66-925. It served with the 187th AHC in Vietnam. On November 22, 1967, 66-925, was engaged in the insertion of elements of the 3rd Brigade, 25th Infantry Division into a hot landing zone 35 miles north of Saigon. At the controls was Major Evart Robeson, a veteran of the fierce battles in the Ia Drang Valley two years before, now serving his second tour in Vietnam.  The major pulled sharply away when enemy fire smashed through the cockpit. One round passed through his left leg inflicting a grievous wound. Within minutes, 66-925 had landed at Lai Khe where Army doctors worked frantically to stem the flow of blood. Stabilized, Major Robeson was transported to the 12th Evacuation Hospital at Cu Chi where surgeons fought to save his life. Tragically, he succumbed to his wounds three days later. 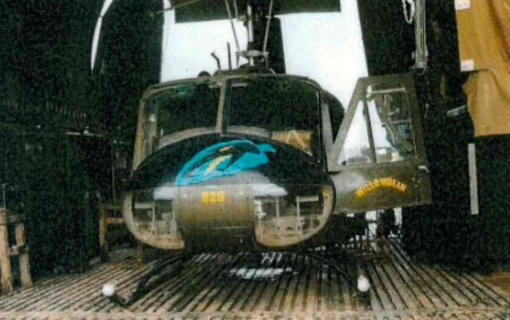