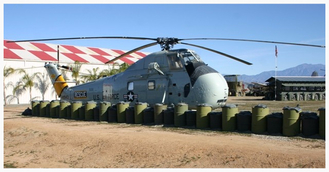 Originally designed as an anti-submarine helicopter the large piston-engine helicopter was modified for service in several roles. The museum’s aircraft HH-34J, S/N 148943, was originally manufactured as an SH-34J by Sikorsky Aircraft in Bridgeport, Connecticut, and delivered to the U.S. Navy in the 1960s. It was one of 14 aircraft later transferred from Navy storage to the Air Force as HH-34J search-and-rescue ships. The aircraft was operated by the 304th Aerospace Rescue and Recovery Squadron, Air Force Reserve, located at Portland International Airport, Oregon. It operated with the 304th for the majority of its Air Force service.

There were five rescue squadrons in the Air Force Reserve and three of them (301st ARRS at Homestead AFB, Florida; 302nd ARRS at Luke AFB, Arizona; and 304th ARRS at Portland, Oregon) were assigned the Choctaw as an interim machine in which to transition from the fixed-wing environment of the Grumman HU-16 Albatross to the rotary-wing world of the Air Force's rescue version of the Bell HH-1 Huey. The HH-34s retained the auto-hover equipment originally installed for their Navy anti-submarine warfare mission, making them very steady platforms for hoist deployment and recovery of personnel.