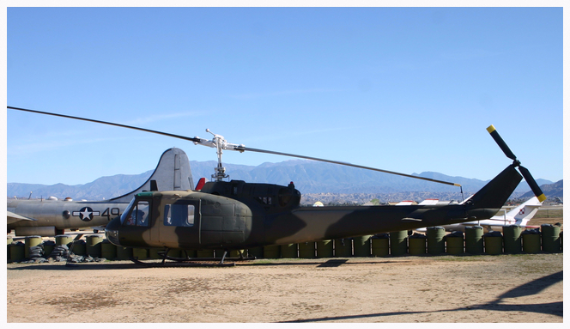 The iconic aircraft of the Vietnam War the distinctive wop-wop of the Huey's
rotor blades stir the memories of the generation that came to age during the
turbulent 1960s. Uniquely versatile, the multi-purpose UH-1 brought tactical
flexibility to modern ground warfare. With the Huey's innovative design and
rugged reliability, American commanders were able to strike whenever and
wherever they wished. The UH-1 provided speed and surprise while retaining
strong logistical support and the ability to adjust to the changing conditions
of the battlefield.

One of the most successful aircraft designs ever built, the UH-1 grew out of
the need to replace the cumbersome, mechanically complex helicopters brought
into service after the end of the Second World War. Known as the "Huey" after
the phonetic pronunciation of its initial model designation "HU-1", the aircraft
was created by modifying a Bell Model 47 Sioux to provide enough room for seven
soldiers or three stretchers. By 1962 the HU-1 had been re-designated the
Utility Helicopter UH-1. The first helicopter produced in large numbers, the
Huey was equipped with a turbine power plant driving a two-bladed semi-rigid
main rotor and a two-bladed semi-rigid tail rotor taking the aircraft to speeds
of over 100 mph.

In its first fifteen years, over 11 thousand UH-1's saw service in Vietnam.
From the unarmed medical evacuation "Dust Offs" named for the clouds of grit
kicked-up whenever they landed to lightly armed "Slicks", nicknamed for their
unencumbered external appearance, and the heavily armed "Gunships" with its
combinations of offensively oriented machine guns and rockets the UH-1 was the
backbone of Army operations in Southeast Asia.

During its 50- year career, the UH-1 has served under some of the most
adverse conditions imaginable, from the Arctic Circle to the most remote
sun-baked deserts. Although all UH-1's have been retired from active military
service in the United States, there are still hundreds in civilian use and
serving in the armed forces of foreign nations.

On display at March Field Air Museum is UH-1F serial number 63-13143.
Designed specifically for the United States Air Force, the F model Huey's
primary mission was to provide logistical support to Inter-Continental Ballistic
Missile sites. Equipped with the more powerful General Electric T 58-GE-3
turbo-shaft engine, the "F" could carry up to ten passengers, making it suitable
for its additional roles within the Air Force as a transport and rescue
helicopter. This aircraft is on loan from the USAF.

According to the Air Force Historical Research Agency (AFHRA/RSA), Maxwell
AFB, AL, the museum's UH-1F has the following history:

UH-1F Huey Helicopter s/n 63-13143 (Model 204) was manufactured by Bell
Helicopter (Textron) in Fort Worth, Texas and delivered to the United States Air
Force on July 24, 1964. Its assignments were: