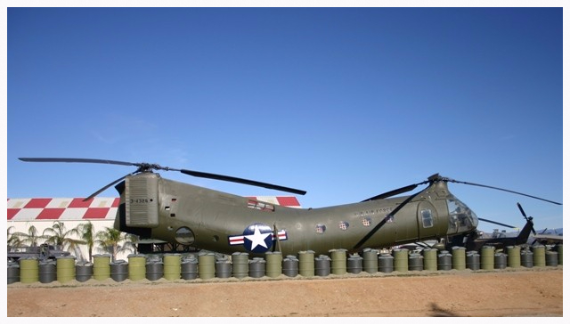 The H-21B was developed in 1955 from the Piasecki HRP-1, the world's first practical tandem-rotor helicopter. The first H-21 flew in 1949; five were delivered to the Marine Corps to test as utility aircraft. It quickly earned the nickname "Flying Banana" due to its odd shape, which prevents the rotors from interfering with one another. The designer, Frank Piasecki, was the first person in the United States to hold a commercial helicopter license. Piasecki Aviation changed its name to Vertol in 1956 and is still designing aircraft as a Boeing division.

These early helicopters were used as utility and rescue aircraft in the Korean War. They had inflatable pontoons allowing the aircraft to land on water. Considered to be the first heavy lift helicopter, a modified HU-21 made the first nonstop transcontinental helicopter flight on 24 August

The museum's HU-21B has serial number 53-4326 served as a USAF Arctic rescue helicopter accommodating 22 troops or twelve stretchers. The forward door accommodates 400-pound capacity swinging-boom hydraulic hoist while hovering. The door on port side is for loading and unloading on the ground. Equipment includes blind flying instruments, pilot-controlled searchlight and fixed landing light.

The museum’s H-21 was retired in June 1963. In 1985 it was seized from drug transporters by a combined federal and local anti-smuggling task force. The helicopter was donated to the museum in 1991.