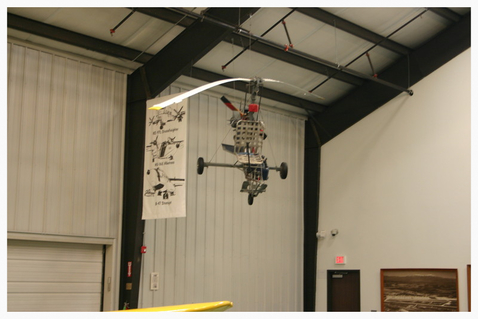 The Benson B-8M gyrocopter is motorized version of the Benson B-7, a small single-seat gyro-glider developed in the mid-1950s by aviation pioneer Igor Benson. A Russian immigrant to the United States, Benson designed the B-8M as a light, safe rotary-wing aircraft for private use. Little more than a rotor, seat, tailfin and motor the B-8M's simple design could be assembled from a kit by aviation hobbyists in less than forty hours using simple hand tools.

High aircrew loss rates during the height of the Vietnam War spurred the US Air Force to acquire several B-8Ms for training and evaluation giving the aircraft the designation X-25A. As a part of the Discretionary Descent Vehicle program, an attempt was made to integrate gyro-copter features into ejection seats and provide aircrews with the ability to maneuver after ejection in hopes of increasing survivability and evading capture. Tests proved promising however, with the end of the war, loss rates decreased and the DDV program was canceled.

The museum's Benson B-8M was donated on January 19, 1991, by Adeline Weigandt of Huntington Beach, CA