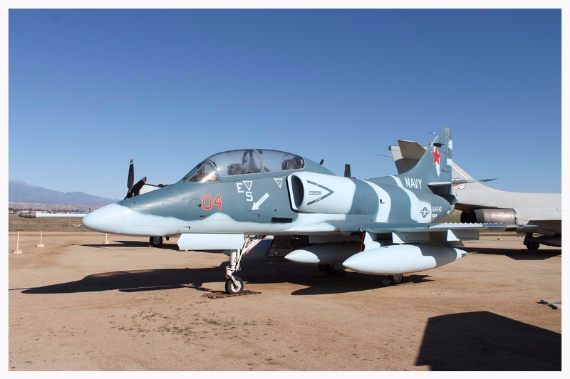 Built primarily as an advanced pilot trainer for the U.S. Navy, this aircraft’s earlier, single-seat cousins the "B, C, E, & F" model's, were used extensively in the Vietnam War along with the U.S. Marines’ "M" model. The Skyhawk filled many different roles in the U.S. military and served with foreign air forces as well. Nearly 3,000 were built.

Assigned to the U.S. Navy Top Gun school as an "Aggressor," the Skyhawk played an important role. Similar in size and performance to many Soviet Bloc aircraft, the A-4 simulated potential enemy aircraft in practice exercises. Studied in Soviet tactics their skill and aggressiveness prepared F-18 and F-14 crews to face real combatants. With an impressive 760 degree per second roll rate – faster than an F-16 - the A-4 "Scooter" could roll-over and get a clear shot before the larger fighter knew it was there.

The museum’s A-4 was one of the last active Skyhawks in service. Her last flight was April 24th, 2003, flying from NAS Roosevelt Roads, VC-8, Puerto Rico, to March Field Air Museum.