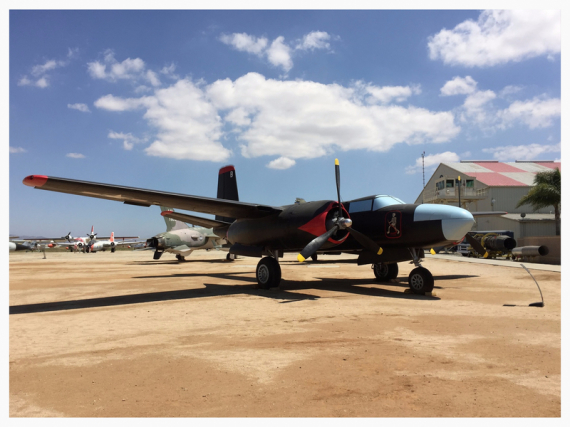 One of the most successful U.S. twin-engine medium attack bombers of World War II, the Douglas A-26 Invader was originally designed as a replacement for the B-25 Mitchell and Martin B-26 Marauder. First flown in 1942, the A-26 saw combat in the Pacific and in Europe during World War II before continuing in service through the first three decades of the Cold War. In 1948, the A-26 was re-designated the B-26 after the Martin B-26 was retired from service. Armed with variations of up to 16 .50 caliber machine guns, air-to-ground rockets and a maximum of 12,000 pounds of bombs (4,000 internally and 8,000 on external wing racks) the A-26/B-26 proved itself a versatile multi-role combat aircraft.

In World War II, Korea and Vietnam, the Invader flew missions as a medium bomber, ground attack and night interdiction aircraft. Invaders served in the air forces of several U.S. allies including Thailand, France and, in a covert role, in the Congo and as a part of the Cuban anti-communist forces during the Bay of Pigs Invasion.

March Field Air Museum's A-26 is a C model serial number 44-35224. Built by Douglas Aircraft in Tulsa, Oklahoma and delivered to the Army Air Force on March 26, 1945 deploying overseas in April. Later it flew with the 4255th, 4160th and 4117th and the 107th and 122nd Bomb Squadrons. In 1952, the aircraft was assigned to USAF units operating from Japan and the 13th Bomb Squadron, 3rd Bomb Wing at Kunsan Air Base, Korea, where it flew combat missions. In 1954, the aircraft returned to Japan before being transferred to storage in Arizona one year later where it was officially retired from the Air Force inventory in June 1958.

In 1981 A-26 44-35224 was flown to March Air Force Base for inclusion in the museum. In 1999, the aircraft was restored to its Korean War configuration. This aircraft is on loan from the USAF.