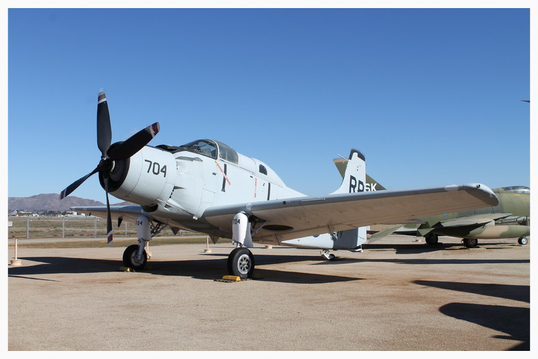 The history of the Skyraider began during WW II when the U.S. Navy requested a replacement for its carrier-based stalwarts the TBM Avenger and SB2C Helldiver torpedo and dive bombers. Douglas Aircraft responded with a design for a straight-wing, single engine propeller driven aircraft the XBT2D-1. Designated the "AD" the Skyraider made its first flight on March 18, 1945.

The advent of the Cold War spelled the end of carrier versus carrier combat pushing the Skyraider into a new role of providing direct support to ground troops. During the Korean War the “Blue Plane” as the North Korean and Chinese troops called the Skyraider, and later during Vietnam, the A-1 with its ability to carry large loads of ordinance and relatively slow speed could loiter over targets providing precise attacks on enemy ground forces.  In both its Navy and, by 1966, Air Force role the Skyraider proved to be one of the best close air support aircraft in aviation history.

3,180 Skyraiders were delivered to the Navy by 1957. The museum’s AD5W / EA-1E is a special U.S. Navy modification of which only 218 were made. Developed to provide early warning of approaching enemy aircraft the AD5W was equipped with a first generation airborne search radar the AN/APS-20.  Widened to accept tandem pilot seating, a radar operator and the radar set the AD5W was capable of detecting low-flying aircraft over 100 miles away.

Navy records indicate BuNO 132789 was manufactured in 1956 and was assigned to VAW-12 Quonset NAS Rhode Island. The aircraft served multiple deployments on aircraft carriers throughout the U.S. Fleet. BuNO 132789 arrived at the museum on May 11, 2006. On loan from the U.S. Navy National Naval Aviation Museum, Pensacola, Florida.  The aircraft will soon wear the livery of VAW-12 “The Bats” one of the U.S. Navy’s carrier-based airborne early warning squadron.