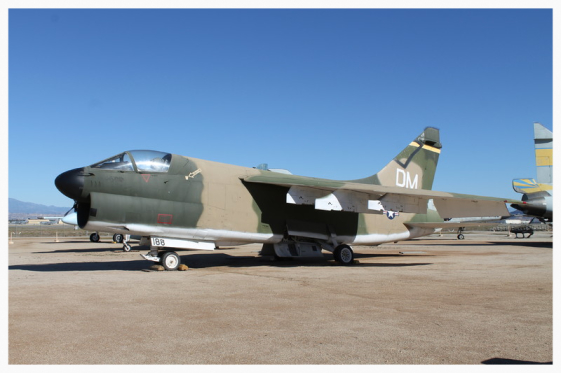 The Ling-Temco-Vought A-7 Corsair II single-seat attack aircraft was originally designed as a replacement for the United States Navy's Douglas A-4 Skyhawk. After modification (the installation of an improved Allison TF41-A-1 turbofan engine and a M61 Vulcan multi-barrel 20mm cannon) the A-7D was also adopted by the Air Force in 1968.

The A-7D proved to be a reliable single-seat, close air support aircraft innovative in being the first aircraft to use a modern Heads Up Display (HUD) providing detailed information on dive angle, airspeed, altitude, drift and weapons guidance. The A-7's advanced integrated navigational system, the Projected Map Display System (PMDS), showed the aircraft's exact location on two different map scales. Serving in Southeast Asia the A-7D proved itself to be an excellent close air support aircraft and a particularly apt platform for delivering the first generation of today's modern precision guided weapons. When A-7D production ended in 1976, 459 had been delivered to the USAF.

Following the close of U.S. involvement in Vietnam, A-7Ds were assigned to the Air National Guard (ANG) units; by 1987 they were being flown by ANG units in ten states and Puerto Rico. A-7Ds were retired in 1993 after replacement by F-16 Falcons.