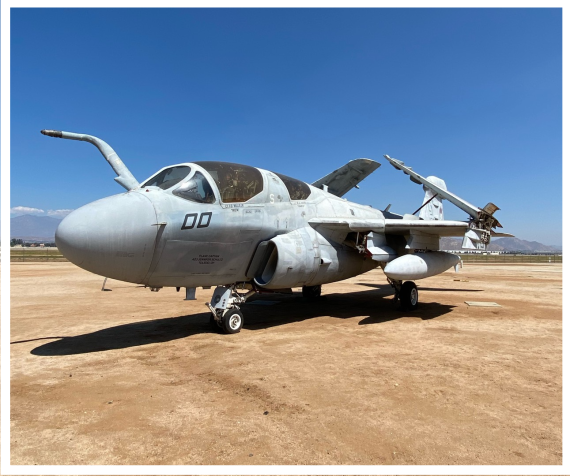 Developed from the Vietnam era U.S Navy bomber the A-6 Intruder, the Northrop Grumman EA-6B Prowler is electronic-warfare aircraft designed to detect and jam enemy radar systems to provide cover for attacking U.S. assets. With a crew of one pilot and three Electronic Countermeasures Officers the Prowler is powered by two Pratt & Whitney J52 turbojet engines, its unique tear drop shaped fuselage is capable of high subsonic speeds. Differing substantially from the smaller A-6, the most notable external changes are the forward fuselage stretch to create a four-seat cockpit, the fitting of an antenna fairing to the top of the vertical stabilizer and the gold tinted canopy to limit electronic interference.

Although designed as an electronic warfare aircraft, the EA-6B Prowler was also capable of suppressing enemy air defenses by directly attacking radar and surface to air missile sites with anti-radiation missiles, such as the AGM-88 HARM and the Shrike.

Entering service during the final stages of the Vietnam War EA-6B’s continued to play an important role post-Vietnam, in the invasion of Grenada, the reprisal strikes against Libya, Operation Desert Storm, the Balkan Campaigns and throughout the War on Terror from Iraq and Afghanistan to Syria.

Here's where you can enter in text. Feel free to edit, move, delete or add a different page element.