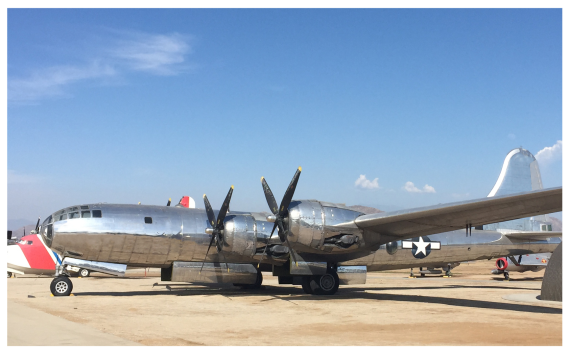 With a range of nearly 6,000 miles and a bomb load of 20,000 pounds, the massive Boeing B-29 Superfortress was the legendary World War 2 precursor to the jet age “hemispheric” bombers. Designated “Very Heavy” a technological leap from its predecessors the “Heavy” B-17 and B-24, the Superfortress was intended to carry the concept of strategic bombing across the vast distances striking deep into an enemy’s homeland.

The B-29 incorporated many improvements, from flush riveting to smooth the airflow over the sleek streamlined fuselage, a pressurized crew cabin allowing long flights in relative comfort and remote-controlled gun turrets. Four powerful, but problematic, Wright Cyclone R-3350 radial engines took the B-29 to a top speed of 357 mph and a maximum altitude of 31, 850 feet. During the war, 414 B-29s were lost, teething difficulties, especially engine fires, accounted for the majority with enemy action bringing down only 147.

Used exclusively in the Pacific during World War 2 the B-29s were first deployed to airfields in China in June of 1944. Supply problems hampered initial efforts to operate from China bringing the utility of the massive Superfortress into question. Seizing forward operating bases in the Marianas Islands removed any doubt of the bombers combat capabilities and changed the course of history as B-29s began to pound the industrial and population centers in the heart of Japan. At the direction of General Curtis LeMay, the B-29 force shifted from high-altitude daylight precision bombing to low-altitude night incendiary attacks. The tactic proved horrifically effective, in a single raid, on the night of March 9-10 1945, 334 B-29s created a firestorm that devastated the center of Tokyo killing an estimated 100,000 people. By early August 1945, the majority of Japanese cities lay in ruins as B-29s from the 509th Composite Group based in the Marinas dealt the Empire a final blow by dropping a single atomic bomb on Hiroshima on August 6th and another three days later on Nagasaki. Reeling from the combined attacks, the Japanese surrendered.

Five years later, B-29s were called to combat again at the outbreak of the Korean War. The B-29 served steadfastly until the modern jet bombers of the mid-1950’s came into service.

March Field Air Museum’s B-29A 44-61669 was manufactured at the Boeing plant in Renton Washington and delivered to the USAAF in May 1945. The aircraft was quickly flown to the Pacific to join the 20th Air Force, 314th Bomb Wing, 330th Bomb Group, 457th Bomb Squadron on Guam where it operated against Japan until the end of the Second World War.

44-61669’s last active-duty assignment was with the 581st Air Resupply Group at Kadena Air Base, Okinawa. Transferred to the U.S. Navy in 1956 the aircraft was recovered from the Naval Test Center at China Lake, California and flown from Daggett Field, Barstow, to March in January 1981 by MARC (Military Aircraft Restoration Corporation). This aircraft is on loan from the NMUSAF